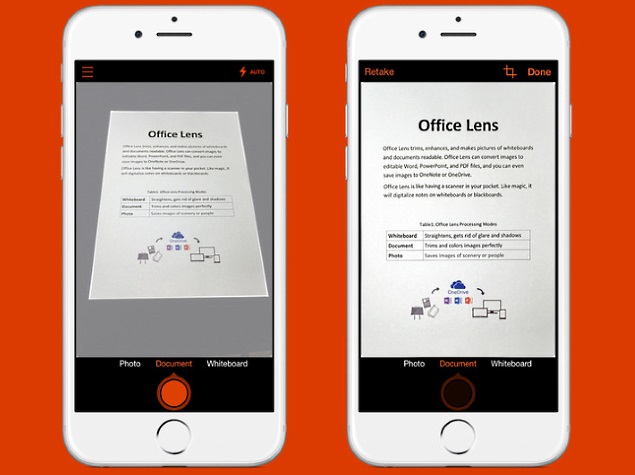 Microsoft said on Thursday it is bringing one of its most popular apps, which lets people take photos of a document and turn it into a editable file, to Apple's iPhone and Google's Android.

The app, called Office Lens, is already available for Windows Phone, but has had little exposure given platform's minute share of the smartphone market.

Bringing the app to iOS and Android is the latest sign of Microsoft's new strategy of putting its best software on as many devices as possible, regardless of whether they are running Windows.

Office Lens essentially turns a phone into a scanner, using the camera to take a photo of a menu, receipt or business card, for example, and instantly cropping the image and storing it in Microsoft's OneNote note-taking app, or OneDrive cloud storage app.

The app, which is free to download on both iOS (App Store) and Android phones as of Thursday, can save an image as a Word file, PowerPoint presentation or PDF file, and uses optical character recognition to make the text searchable and ready for editing.

Microsoft on its blog post announcing the launch of the Office Lens apps for Android and iOS, detailed its reasons for providing the app for other platforms, "Just over a year ago, we introduced Office Lens for Windows Phone-and over that time the app has become one of the most popular free apps on Windows Phone, with an average rating of 4.6 stars (out of 5) from more than 18,500 reviews... Bringing Office Lens to iPhone and Android is a significant step for extending OneNote capture capabilities to more devices and endpoints."