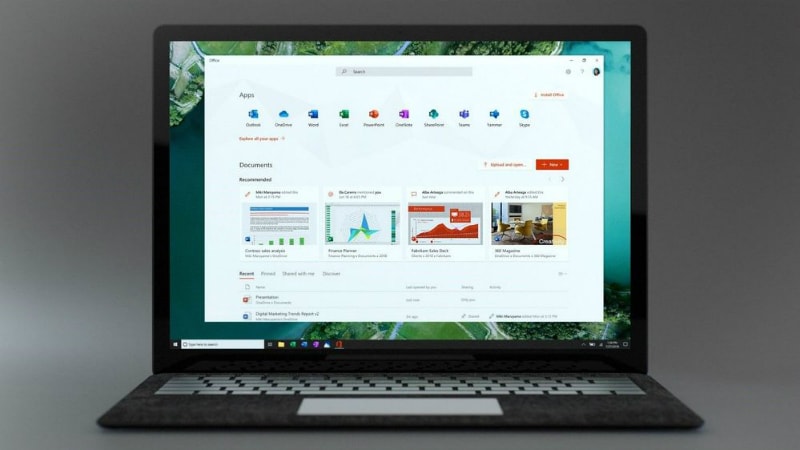 Microsoft has now launched a new Office app for Windows 10 customers, replacing the current 'My Office' app in the Store. The new Office app offers a simple interface and pushes free online Office apps as well. At the Microsoft Business Forward conference in Paris, the company also announced that it will bring its enterprise-aimed Dynamics 365 AR apps to iOS and Android phones in the future. These apps were first only available on Microsoft HoloLens, but the company is now looking to expand availability to increase ease-of-use.

The new Office app, once installed, shows users all the Office 365 apps that are already installed on to your device, and the apps that you can install. It also offers quick access the most common Office apps and services , and promotes free online versions of Word, Excel, PowerPoint, and Outlook as well. Most users are unaware of these free online software services, and the Office app brings them to the users' attention.

Microsoft says that the new Office app will become available to users on a rolling basis over the next few weeks and will be installed automatically as an update to the MyOffice app, which comes pre-installed as part of Windows. Just search for "Office" in the search bar of the Windows start menu to open it. The app can also be downloaded from the Microsoft Store. The company says that the app works with any Office 365 subscription, Office 2019, Office 2016, and Office Online - the free Web-based version of Office for consumers.

Separately, as mentioned, Microsoft is also bringing its HoloLens Dynamics 365 AR apps to iOS and Android. The Dynamics 365 Remote Assist app will be available for preview in April. This tool will let smartphone users send a video to another person, and the recipient can then add annotations to it, which appear as AR effects. It won't be fully featured and isn't the same as wearing a headset, but the essential functions will be available for testing and troubleshooting.

Furthermore, iOS users are getting an app called Product Visualize that is essentially an AR model displaying tool for complex products like cars and machinery. Manufacturers can use this tool to make AR models of their product, to help customers get an idea of what it is, even before it is made into reality. Microsoft's mixed reality business head Lorraine Bardeen told The Verge 'that this feature will come to HoloLens later, but that most sellers are already working with iOS devices, so it made more sense to start there.'