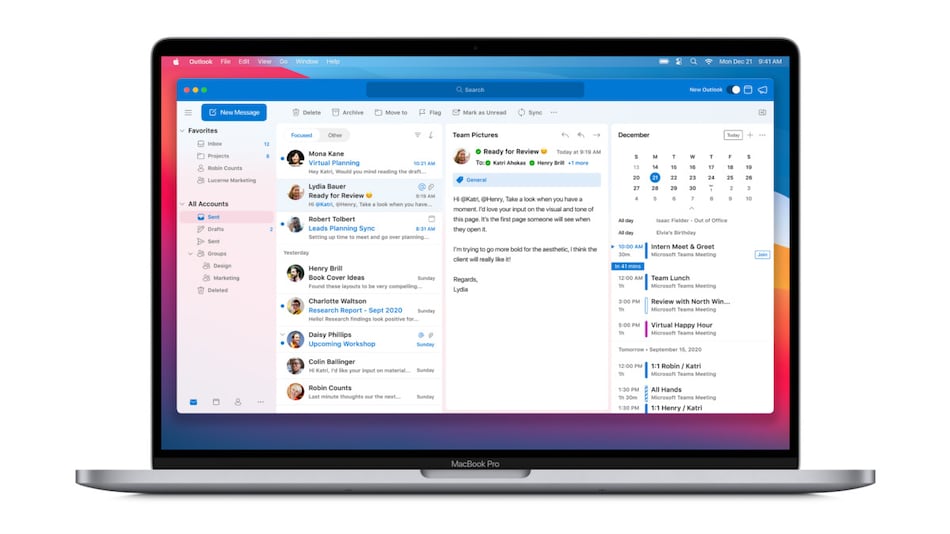 Microsoft Office 365 apps for Mac are now getting updates that will bring improvements in their performance on new Mac machines with Apple's new M1 chip. As per an announcement by Microsoft, several apps, including Excel, Outlook, OneNote, PowerPoint, and Word for Mac are now optimised for Apple Silicon. The company said that these apps have also been redesigned to work with macOS Big Sur for more productivity. The Cupertino company has also announced changes to Outlook for Mac, allowing users to add their iCloud accounts to Outlook and keep it alongside other accounts.

According to a blog post by Microsoft, the company has released new versions of its core flagship Office apps, that includes Excel, Outlook, OneNote, PowerPoint, and Word, will run faster and take full advantage of the performance improvements on new Mac machines – MacBook Air, 13-inch MacBook Pro, and Mac mini. Microsoft said that since the new Office apps are Universal, “they will continue to run great on Macs with Intel processors.” The apps have been redesigned to match the new look of macOS Big Sur.

Those who have automatic updates turned on will start receiving the updates for these apps for Microsoft 365 for Mac. Otherwise, users can go to the Mac App Store and click on the Updates tab, or with Microsoft AutoUpdate, they can go to the Office app's Help menu and choose Check for Updates.

A new dictation toolbar with voice commands is coming to Word and Outlook for Mac in early 2021
Photo Credit: Microsoft

Microsoft has also announced other major improvements. It said that a new Office Start experience for Microsoft 365 for Mac apps like Excel, PowerPoint, OneNote, and Word for Mac that incorporates the Fluent UI design system will be available to users next month. The new Outlook for Mac also gets a redesign “that matches the new look of macOS Big Sur.”

The company has also announced the support for iCloud accounts in the new Outlook for Mac. The update, that will be rolled out in the coming weeks, will enable users to add iCloud accounts in Outlook to organise work and personal emails, contacts, and calendars together.

Apart from apps in Microsoft 365 for Mac, Microsoft has also been working on other applications as well. It announced that the company is working on Microsoft Teams universal app support for M1 Mac machines. The app is currently available in Rosetta emulation mode on Mac machines with M1 and the browser. There is a new ‘Tell Me' search box that, Microsoft said, “quickly gets you to the Office tools you need or actions you want to take by just typing what you are looking for in Word, Excel, PowerPoint, or OneNote for Mac.”

Microsoft also said that it plans to roll out a new dictation toolbar with voice commands for creating content with your voice is coming to Word and Outlook for Mac in early 2021. Furthermore, users will be able to share calendars in new Outlook for Mac soon.