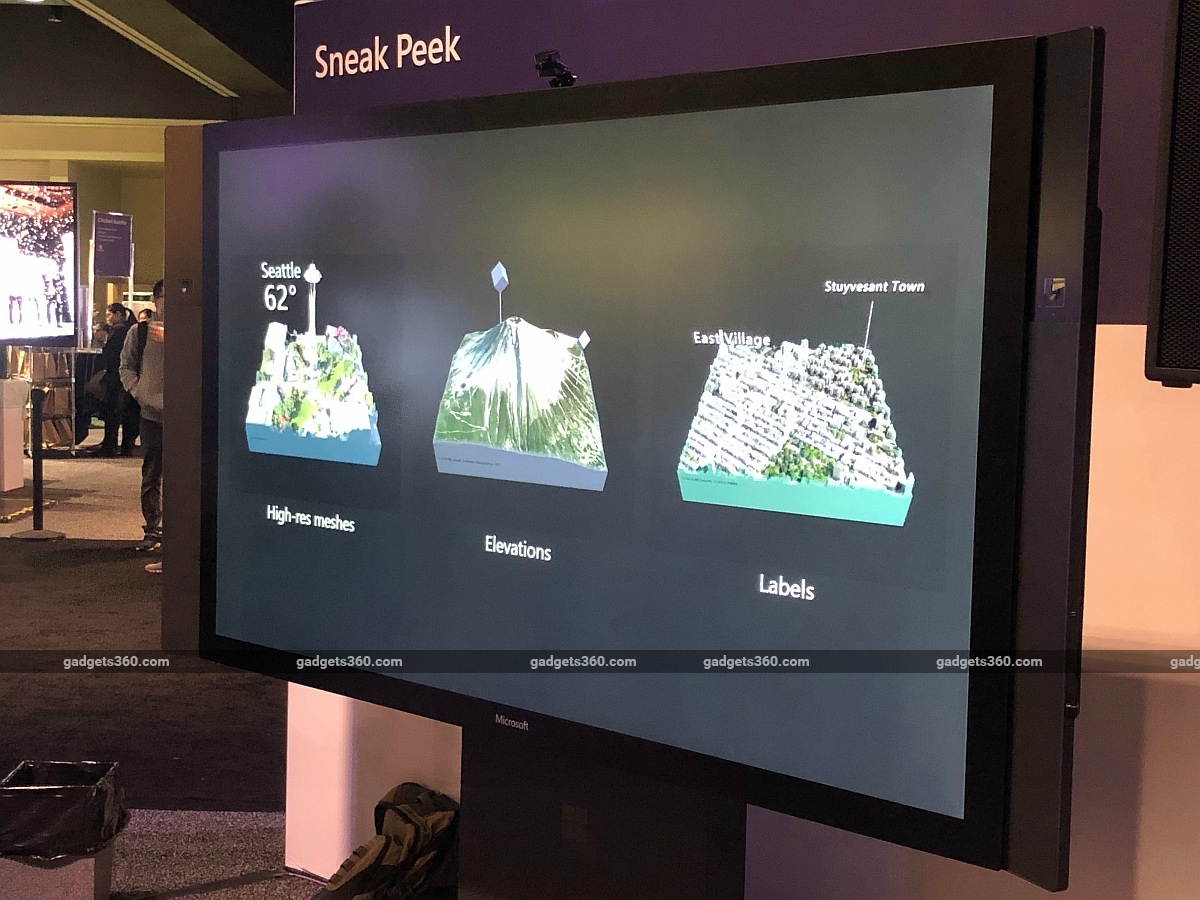 While Apple and Google keep on improving their mapping data by adding advancements such as real-time navigation in newer regions, Microsoft may have already secured the future by starting building maps for mixed reality (MR) scenarios. A group of three Microsoft engineers unveiled a Maps SDK that is aimed to offer maps specifically for MR headsets. The development was showcased at the Build 2019 conference on Monday. The key objectives of being at the developer conference were to make developers aware of the newly introduced Maps SDK, get their feedback, and understand various potential use cases.

"We append interesting places around the cities and have provided a description about those places," Brian Kircher, a Senior Software Engineer on the Maps team and developer for Maps SDK, tells Gadgets 360 at the sidelines of the Build 2019 conference. "So for instance, if you're planning a vacation in Seattle, you can go and check any of the famous places in Seattle you'd like to visit before actually visiting the city. So what you'll get through the Maps SDK is the sense of that city. It is not just showing you the maps in 3D but along with virtual reality experiences. It, thus, provides very human connections."

Kircher has been working on the Maps SDK for more than one and a half years. He and his teammates, namely David Buerer and Jesse Levine, built the client layer from the scratch -- using C# code. They used Bing Maps data to enable accurate maps and Unity to enable MR experiences.

Using the Maps SDK, developers are touted to build an out-of-the-box map along with 3D terrain and configurable city by dragging the map control into a Unity scene and add location labels sourced from Bing Maps. They can also overlay additional geo-anchored content that can be explored via a table-top map experience along with controls such as pan, and zoom.

Kircher highlights that use cases of the MR maps being created through the Maps SDK are enormous. "I think the applications are industry-wide - it's not catering to one industry or two industries," he says. "You can do with such developments almost like anything you can think of."

Developers who are already working with the Unity engine can download the Maps SDK to integrate MR map experiences within their apps. Additionally, an Outings MR sample app to offer similar features to mobile versions has also been developed for Android and iPhone users. The team notably worked closely with the Microsoft's Outings team to bring the immersive experiences for VR and MR headsets, including the latest HoloLens 2.

"We have a lot of ideas and we heard a lot of ideas," Kircher tells Gadgets 360. "We're trying to pick which one should be a part of our next integration -- based on the feedback."

The future projection roadmap of the Maps SDK includes an immersive mode, geospatial services through Bing Maps, addition of new map data such as labels and roads, custom terrain insets, and offline map data. However, there aren't any plans to integrate the MR experience within the original Bing Maps app.

Interested developers can take a look at the Maps SDK through GitHub. Alternatively, the Outings UWP app for MR headsets is available for download via the Microsoft Store.

It is worth pointing out here that Microsoft isn't alone in the race of enabling mixed reality experiences for developers adding maps to their apps. Last year, Google also brought a Maps-oriented SDK to start offering the ability to bring immersive map experiences.