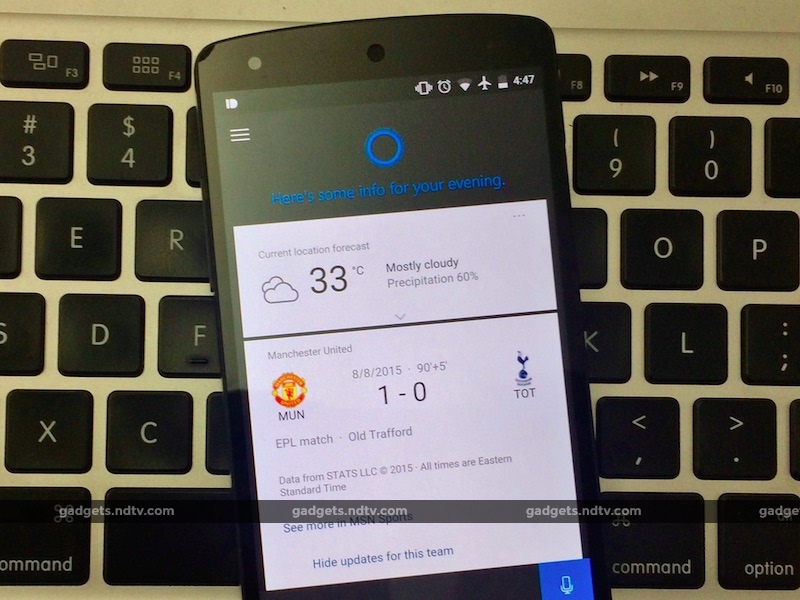 Microsoft's voice-based virtual assistant Cortana was promised for Android and iOS back in May. The app soon made its way to Android in beta. Now, the Redmond-based tech giant is all set to bring it to iOS. The company has started hiring Cortana for iOS beta testers. The invitations are expected to arrive within weeks, says the firm.

"Your life is not limited to one device, and neither is your digital assistant. Cortana is with you on your Windows 10 PC, tablet, and phone-helping you whenever and wherever you need it. But we also know that there's a choice of mobile devices out there, so we want help from our Windows Insiders to make sure she's a great personal assistant on iOS too," said Syed N, Microsoft Community forum Moderator and Support Engineer on Tuesday.

The forum post clearly mentions that Microsoft is looking "for a limited number of people to get their hands on an early version of the app." In addition, the first public release of the Cortana for iOS beta would initially be available only in the US and China. The company plans to expand Cortana for iOS beta's reach to more regions in coming months. Initially, not all features would be present for iOS users including the "Hey Cortana" voice commands.

Interested testers in the US can get an early access by taking a short survey on the Surveymonkey website. The survey asks them their Microsoft email, Apple ID, which iOS handset do they use, and other queries. Microsoft would then start sending out download links over email to testers in next few weeks.

To recall, Microsoft introduced Cortana to a large number of users globally as one of the highlights of Windows 10 in July. The feature on Windows 10 PCs and tablets syncs with apps on Windows Phone, Windows 10 Mobile, Android, and now with iOS, expanding the reach of the virtual assistant in terms of usefulness. The virtual assistant was first unveiled as a competitor to Google Now and Siri when launched with Windows Phone 8.