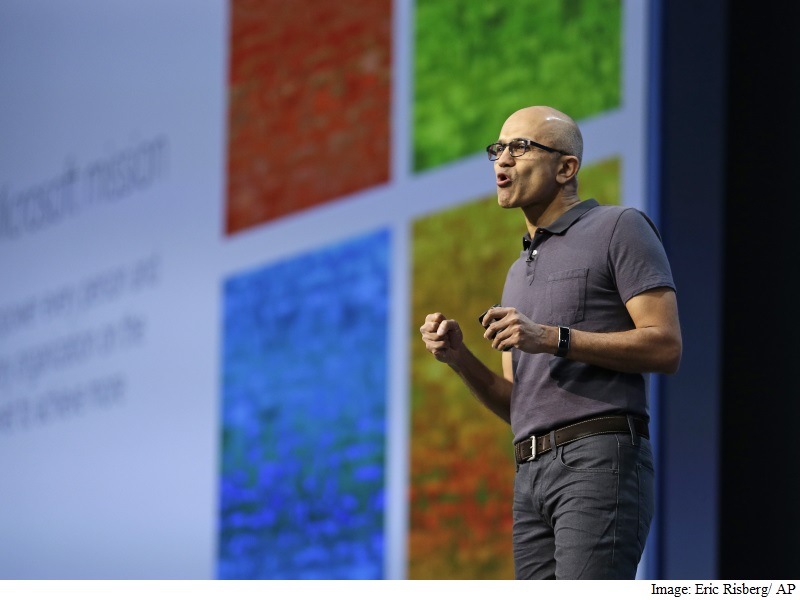 Microsoft Chief Executive Officer Satya Nadella said his company is committed to the emerging market for artificial intelligence-based chat software, one week after the company's first Internet chat bot in the US was so manipulated by users that it had to be pulled down.

"It's a simple concept, yet it's very powerful," Nadella said about the strategy the company has dubbed Conversations as a Platform. "It is about taking the power of human language and applying it more pervasively in all our computing."

In a keynote speech Wednesday at the company's Build conference for software developers in San Francisco, Nadella outlined Microsoft's strategy for conversation-based products working with bots software that use artificial intelligence to automate tasks as well as tools for developers to create their own.

Nadella has been trying to expand Microsoft's reach and influence in AI, emphasizing how the technology can augment mobile and cloud-computing products. He views the bot strategy as a key way to bring the benefits of artificial intelligence to businesses, consumers and developers. The CEO predicts such programs will dominate the next generation of computing, replacing apps in some scenarios.

On March 23, Microsoft released Tay, an online AI chat bot designed to mimic the personality of a teenager, to attract millennial users. Yet the company had to yank the program after Internet users taught it to spew racist, sexist and pornographic remarks in what the company called a "coordinated attack" that took advantage of a "critical oversight."

In his keynote, Nadella said the company is taking a principled approach to AI in the wake of Tay's misbehavior. "We want to build tech so it gets the best of humanity not the worst," he said.

While looking to the future, the company also promoted upgrades to the product it has been most closely identified with for decades the Windows operating system. At Build, Windows chief Terry Myerson said Windows 10, released in July, now has 270 million active users. That's four times the adoption pace of the much-maligned Windows 8 and 1.5 times that of the more popular Windows 7.

The Redmond, Washington-based company has pledged that Windows 10 will be on 1 billion devices within two to three years of release. Myerson also announced an update to Windows 10, coming this summer.

For the developers in the audience, Microsoft said it will make it easier to add Windows security features to their websites. By adding a few lines of code, developers can let people authenticate themselves on sites using Windows Hello, the company's secure logon system that uses face scans and fingerprints, rather than passwords.

The company is also helping developers update their Windows programs with the ability to let people draw inside applications with a stylus. The feature, called Windows Ink, would let a hiker sketch a route on a digital map, and the device would automatically calculate the distance, for example.

Microsoft isn't the only company pursuing bots. Facebook is opening up its Messenger app to bots that assist with shopping and appointments, and the social-media leader is expected to expand that effort in coming months. The Wall Street Journal reported in December that Google is working on bots, and the AI programs are rampant on messaging services like Slack and Telegram, among others. Tencent's WeChat, one of the inspirations for Microsoft's strategy, has been an early leader.

Bots will be "one of the future tenets of the mobile business," said Michael Facemire, an analyst at Forrester Research Inc. Cortana, and Microsoft's strength with developers, will be an advantage as the software maker embarks on this strategy, he said.

Microsoft demonstrated its Skype video calling and Cortana digital assistant technology working with bots to do things like book a hotel and schedule deliveries. In one demo, Cortana popped up during a Skype chat to tell the user there was a cupcake delivery bot looking for her. It let this person, Skype executive Lilian Rincon, share her location with the bot and track the confection. During a video discussion about an upcoming conference trip, Cortana worked with a bot created for Westin because it knew Rincon had preferred status at that hotel chain.

Microsoft will also update Cortana so customers can access it without first unlocking computing devices, letting developers integrate it more easily into apps and other gadgets. That may help Microsoft or third-party hardware companies make microphones or other devices that let users ask Cortana to do things for them at home, according to Microsoft executive Yusuf Mehdi. It'd be similar to how people use Amazon Inc.'s Echo devices.

Microsoft also showed a video of an artificial intelligence program for vision-impaired customers that answered questions about food and prices on a restaurant menu using a mobile phone camera to read and voice software to speak.

Still, the Tay debacle loomed large over the proceedings. Though Microsoft plans to recommission the bot once it's been made safer from exploitation, Gartner analyst Chris Howard said the ease and speed of Tay's public re-programming may delay corporate adoption.