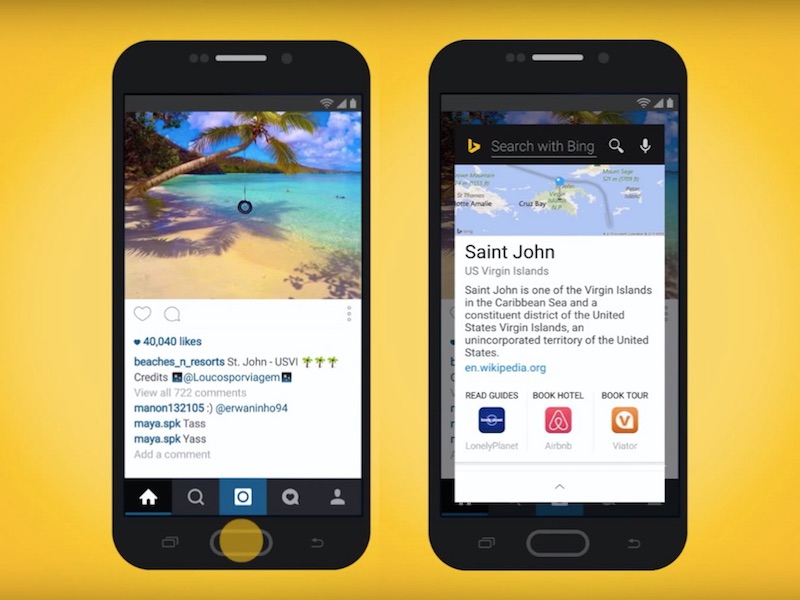 Can't wait for Google's Now on Tap to arrive on your phone with Android 6.0 Marshmallow? You might want to check out Microsoft's Bing Search app for Android in the meantime. Months before the scheduled release of Now on Tap, Microsoft has updated Bing Search for Android to add Snapshots that offers similar features to a wide range of Android users.

Unveiled at Google's developer conference I/O 2015, Now on Tap extends Google's Search feature across different apps. The feature allows users to get contextual information -- like the information about the band you're listening to on the music app, for example. It is, however, yet to go live in the latest developer preview of Android 6.0 Marshmallow, and won't be available to the general public until later this year, or next year depending on your Android device's manufacturer, and carrier.

After installing the Bing Search app for Android, you will need to turn on the accessibility mode in your device's settings to access Bing's Snapshot feature (Bing may prompt you to change the settings from within the app, in that case, you aren't required to manually go to settings). The app uses the feature to bring up an overlay and read information from other apps. Unfortunately for now, the Snapshots feature is limited to the US in English. The feature works on devices running Android 4.4 and above.

To use the feature, assuming you're done with all the settings hoopla and live in the US, hold down the home button to get contextual information of whatever it is that you were reading or watching in a range of apps. Apps that have been documented to work thus far are Facebook and Hangouts. Contextual information include key facts about what you are looking at, as well as relevant apps and services.

The company aims to increase the number of support apps by giving developers the ability to integrate Snapshots right into their apps. It has released APIs for Bing's knowledge and action graph to developers.

"Whether you have a messaging app or a music app, your users shouldn't have to 'go to search' to get information related to what they're doing in your app. With Bing's new API, you can expose the relevant information to your users directly within your apps, keeping them more engaged," the company noted in a blog post, adding developers can request access to the API.