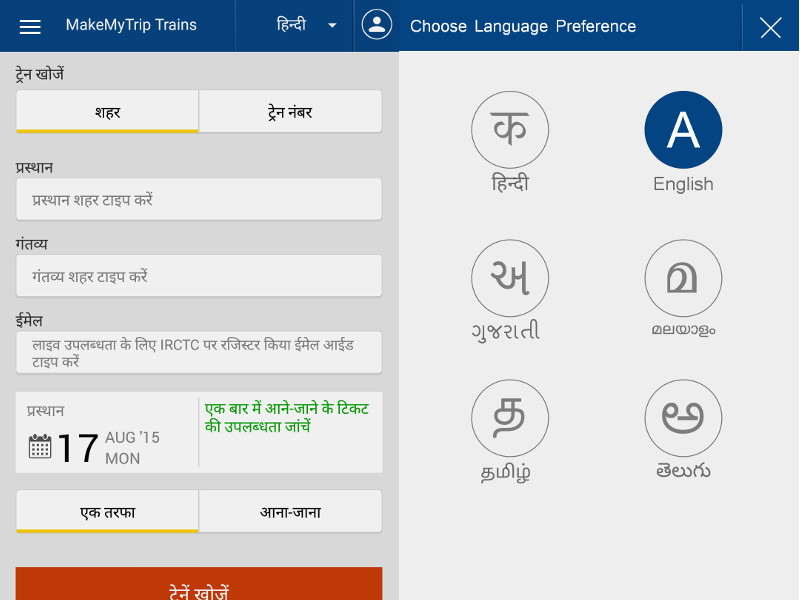 Online travel agency MakeMyTrip announced the launch of a train-booking app that lets users book and search for train tickets in six languages. The company claims it's the first in the country to introduce a vernacular rail booking app that supports five Indian languages - Hindi, Tamil, Telugu, Malayalam and Gujarati - in addition to English.

The company highlighted its efforts in language support began last year when it launched India's first flight booking service in Hindi on mobile, and said that language support will be extended to Gujarati, Telugu, Tamil and Malayalam this year.

The app allows users to book General and Tatkal quota train tickets on all routes in India, and claims to be the only rail-booking app that enables return-ticket bookings. The app also covers enquiry of fare details, PNR status, seat availability, selection of berth preference and information on nearby stations if no trains are available from the boarding station selected by the passenger.

Anshuman Bapna, Chief Product Officer, MakeMyTrip.com, said that the company continues with its mobile-first approach, introducing never-seen-before features first on the app, and plans to exploit the potential in vernacular content to bring more people online. "Rail was the fastest-growing travel segment in India in 2014. It is also the second-biggest travel segment in India. With online rail penetration at 43 percent in 2014, providing value-added services on mobile will further accelerate the growth and adoption of online rail-bookings." He said.