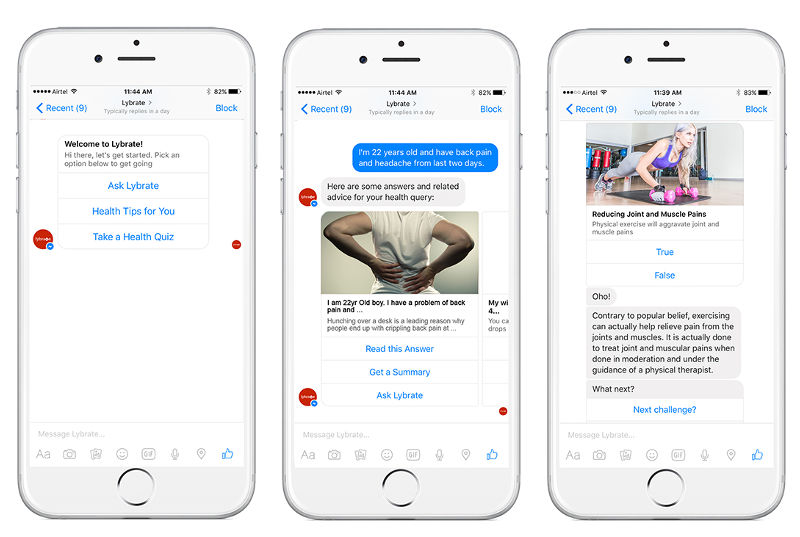 Online doctor consultation platform Lybrate has extended its service to Facebook Messenger, which allows people to make health-related queries, get tips on health, and take a health quiz with the company's chatbot.

Lybrate's bot is accessible on its Facebook page, while the URL to the chatbot can be shared as a hyperlink as well. For now, the service does not allow booking of doctors through the messenger chatbot.

The integration is similar to Practo's integration with Twitter, launched in April 2016, where users can send health queries to the @AskPracto Twitter handle, which would send the user relevant links to articles on its consultation page. Lybrate's bot shares links and excerpts from articles on its Q&A portal on health issues, and says that it keeps the identity of its users anonymous and private. Lybrate has also integrated its Health Quiz feature in the Messenger bot to drive engagement and awareness about health issues.

Speaking to Gadgets 360, Saurabh Arora, Founder and CEO, Lybrate said that the startup had been working on the feature since the launch of the messenger bot platform at Facebook's F8 developer conference, and complimented Facebook's documentation of its API for making the process seamless.

"The main objective was to find out what kind of experiences would work on Facebook Messenger. We wanted to give something that could help a lot of users - booking an appointment is not a very frequent use case. We wanted to address use cases that are much more common, as messenger as a service is always on in your phone," Arora said, explaining why appointment booking wasn't integrated into the bot's functionality.

"At the core, we're a communication platform that connects patients and doctors, not an appointment booking engine. Even though we have that functionality. That's the biggest difference between us and other platforms. This is a far more frequent use case than finding a doctor for booking an appointment. Whenever we do things on other platforms - we do the core first, not the periphery," he said.

Lybrate uses machine learning algorithms in its free consultation to figure out the nature of a question in order to direct it to the right kind of doctor, Arora said. "As a user, I might not know if the answer needs to come from a nephrologist or a cardiologist, or a general physician. We don't ask users to specify the doctor," he said.

(Also read: Chat With Over 80,000 Doctors and Get a Second Opinion at Home With Lybrate)

Users have to pay to consult a doctor of their choice in a one-on-one conversation over text, phone call, or video call. Arora said that the platform currently has a network of over 100,000 doctors, and has seen three million app downloads on Android since the launch of the app in January 2015.