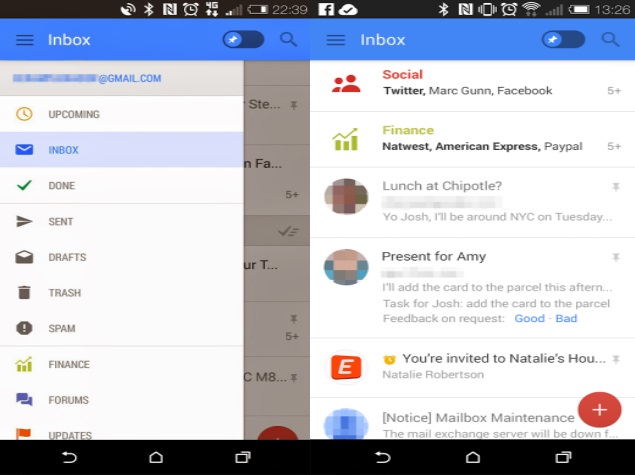 Google is reportedly testing an overhauled design for its Gmail for Android app, if a bunch of leaked screenshots is to be believed. Reports also point to similar changes coming to a variety of Google apps.

Geek site has posted some purported screenshots of the Gmail's Android app that shows new features such as new tabs, snooze button and the option to pin messages.

Notably, Google introduced the tabbed interface to Gmail in 2013 that received the slider menu featuring the category folders with colour coded 'smart labels' (forums, promotional, social and updates). The leaked screenshots of the Gmail Android app indicate that the search engine giant might be pushing an update on the lines of its tabbed interface.

Further, the rumoured upcoming update of Gmail is said to bring a new 'snoozing' feature that will offer users an option to mark an email as unread, even after reading it. The feature is expected to bring option to delay an email for a set of time, much like snoozing the alarm clock.

In addition, Google in an attempt to show the priority mails on top is said to be likely to introduce pinning emails option, which the Geek report claims can replace the star-based system in the current version.

The leaked screenshots also point to a slightly update to the current tabbed interface of Gmail for Android, not radically different. 9to5google in a report has cited sources that claimed that Google is also considering changes for its Gmail for iOS app, as well as various other Google apps.

The broad sweeping changes expected to come to the range of Google apps will reportedly focus on full page display of content, removing menus and other layout modifications. The report further claims that gesture and voice commands will swap some of the functionalities of the Gmail app. "It's like full screen email where they highlight one email at a time and you sort of cycle through them by snoozing them, archiving them away or deleting," elaborated the source.