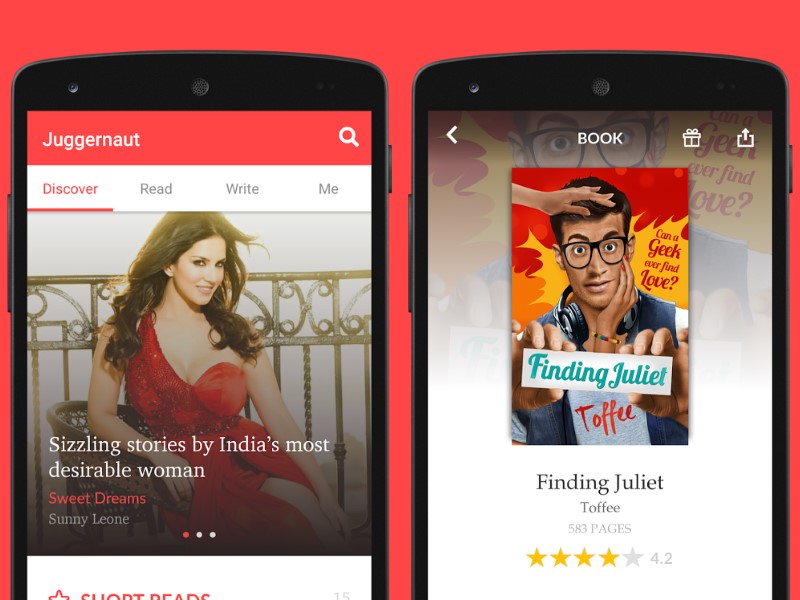 Fond of reading but find it hard to lug around books with you? Now, you can access a range of exciting reads - from short stories by Sunny Leone to a novel by hit Pakistani TV serials writer Umera Ahmed - on your smartphone with the app by India's latest publishing house.

Juggernaut Books, founded by ex-Penguin Random House publisher Chiki Sarkar, on Friday announced the release of its app, initially available on the Android platform (with iOS to follow a week later), offering over 100 titles, over half of which are its originals, a release said.

Spanning popular genres like crime, romance and sex, fantasy, self-help, the collection on the app offers short reads, serialised reads and collections based on length, among other formats.

Available for free on Google Play and on the App Store a week later, the Juggernaut app will offer its users the ability to browse through covers, previews and categories to discover and sample new titles, and buy or gift them. They can also buy the available books for half price till the end of the month.

The app also allows users to ask authors questions as well as to notify them about author-related events.

"All publishers want to bring their readers and writers close to each other and find new readers for themselves. This is our dream for the app," said Sarkar.

"We've thought through many aspects of book browsing, buying, reading and authorship that cause friction, and worked to make them easy, enjoyable and transparent. We hope to onboard a lot of new readers on to our apps and engage the die-hards," said Juggernaut's CEO Durga Raghunath.

The publishing house has tied up with online payment platform Paytm for the app, now .

Juggernaut Books, which aims to give authors both a digital as well as a physical platform, has authors like Arundhati Roy, William Dalrymple, Twinkle Khanna, Rujuta Diwekar, Husain Haqqani, and Nobel winner Svetlana Alexievich. It will launch its physical list in July 2016.