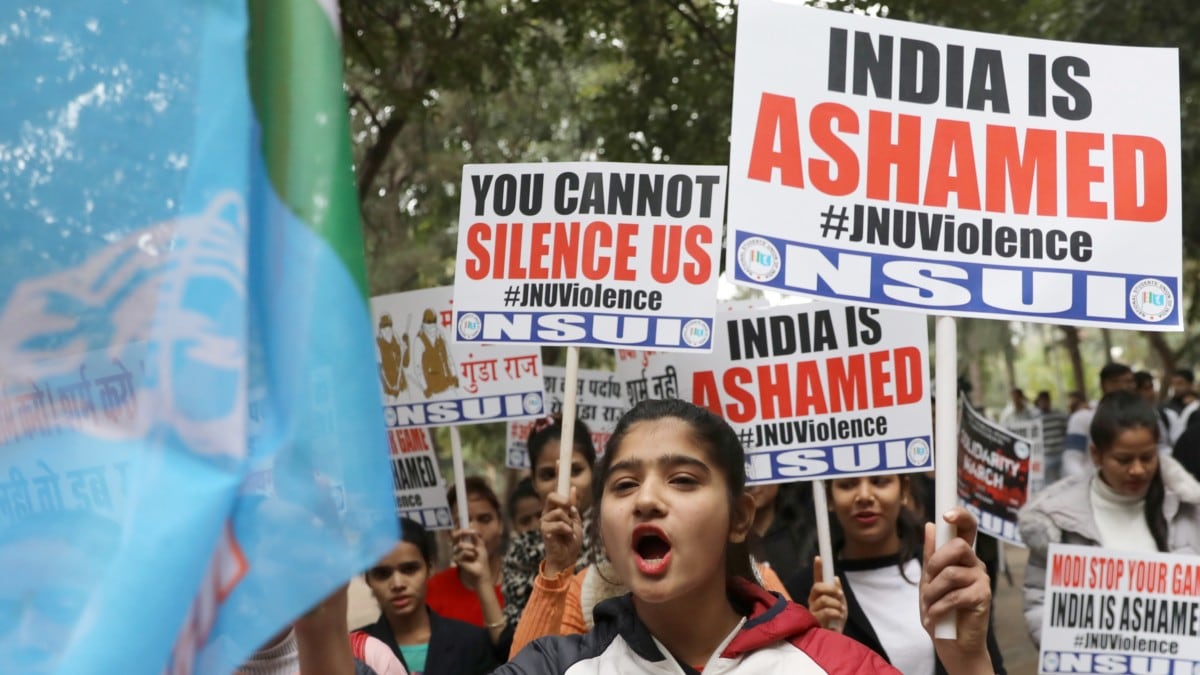 The Delhi High Court Monday sought response of the police and Delhi government as also WhatsApp, Google and Apple on a plea of three JNU professors for preserving data, CCTV footage and other evidence relating to the January 5 violence on the varsity campus. Delhi Police informed the court that it has asked the JNU administration to preserve and hand over CCTV footage of the violence. Justice Brijesh Sethi listed the matter for further hearing on Tuesday. The court was informed by Delhi government Standing Counsel (criminal) Rahul Mehra that the police has not yet received any response from the university administration.

The counsel said police has also written to WhatsApp to preserve data of two groups "Unity Against Left" and "Friends of RSS" including messages, pictures and videos and phone numbers of members, related to JNU violence incident. The petition was filed by JNU professors Ameet Parameswaran, Atul Sood, and Shukla Vinayak Sawant seeking directions to the Delhi Police Commissioner and Delhi government. It sought direction to the Delhi Police to retrieve all CCTV footage of JNU campus.

On January 5, a mob of masked men stormed the campus and targeted students in three hostels, unleashing mayhem with sticks, stones and iron rods by hitting inmates and breaking windows, furniture and personal belongings. Three FIRs have been registered at Vasant Kunj (north) police station in the incident. The plea claimed it was evident that a significant amount of data, information, evidence and material pertaining to the said incident of violence, including persons with their registered phone numbers responsible for the same, was communicated through WhatsApp's platform, and its data back-up is an important evidence in respect of the incidents of violence.

"In order to ensure that the relevant evidence may be preserved, JNU teachers association (JNUTA) has sent requests/ representations to respondent nos. 1 (Police Commissioner), 3 (WhatsApp) and 4 (Google), asking that all these materials be safely retrieved for investigation purposes.[..] In these representations, JNUTA has cited relevant provisions of the respondent no.3's Terms of Use, Information Technology Act, 2000, Information Technology (Intermediary Guidelines) Rules 2011 and other applicable laws. The petitioner no.2 has also sent similar request/representation to the respondent no.3," the plea said.

However, the police has neither responded to such requests placed by one of the petitioners and JNUTA nor has it reached out to them, or other informants, despite clear and cogent material provided to the investigating agency along with the written representations, it claimed. The plea said the petitioners apprehend that in the absence of a direction from the court or the police commissioner, the relevant evidence may not be properly preserved. It claimed that as per the knowledge of the petitioners as well as news reports, the police has not yet retrieved CCTV footage, which is crucial evidence.

ISRO GSAT-30 Satellite to Be Launched on Friday, Aboard Ariane 5 Rocket