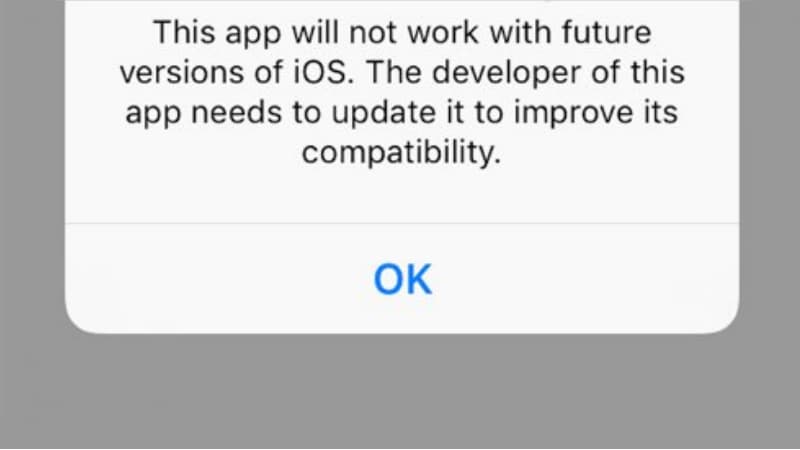 Apple has been weighing down on 32-bit apps ever since it introduced support for 64-bit apps in iOS 7 in 2013. Last year, it announced that moving forward all new apps need to be made in 64-bit mandatorily. Now, inside iOS 10.3 beta, the company has removed support for existing 32-bit apps altogether. When a 32-bit app is opened on a device running iOS 10.3 developer beta version 1, a dialog box shows up saying that the app will not work in future versions of iOS, and for it to work, the developer needs to get with the times. This indicates that iOS 11 will not support 32-bit apps.

This hints that the company is most likely to withdraw support for 32-bit apps with the release of iOS 11 this fall. Founder of PSPDFKit Peter Steinberger shared a screenshot of this warning dialog box showing up in iOS 10.3 beta version 1 rolled out to developers. The dialog box appears only for 32-bit apps installed on the iPhone. 9to5Mac tried opening the 32-bit Waterslide app (which has been removed from the App Store now), and a dialog box with a tweaked message popped-up. It read, "Waterslide Needs to Be Updated. This app will not work with future versions of iOS. The developer of this app needs to update it to improve its compatibility."

Apple introduced support for 64-bit apps during the launch of iPhone 5s in 2013. It made it a mandate for all new apps released post February last year to be built on the 64-bit framework. It still continues to support 32-bit apps, but with iOS 9 release, those apps started coming with an alert that warned that the legacy app could slow down your iPhone or iPad.

Now with iOS 11, Apple will finally withdraw support for legacy apps after many fair warnings. The company has been in clean-up mode since last year, and removed nearly 50,000 unwanted and abandoned apps from the App Store.