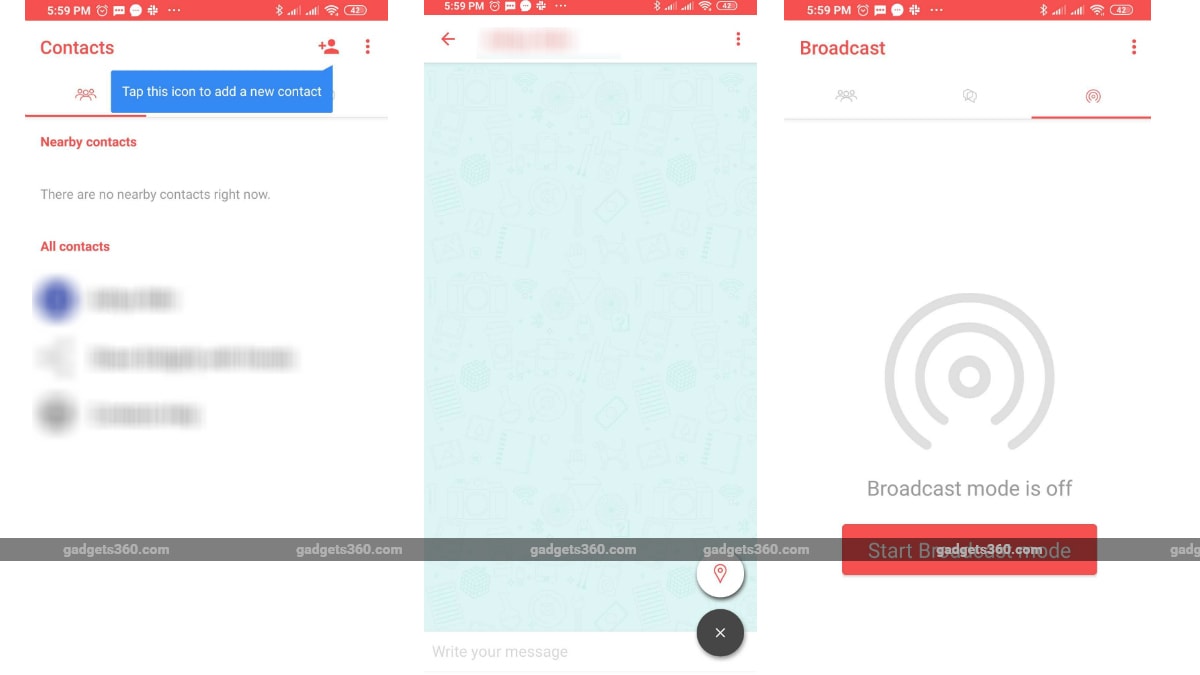 Bridgefy offline communication app is available on Android and iOS both

With the ongoing protests against the Citizenship (Amendment) Act (CAA), and Internet shutdown in several areas in Delhi, the Bridgefy app has suddenly gained popularity. Bridgefy is essentially an offline messaging app that uses a mesh system to communicate with people near you, instead of relying on the Internet. It uses Bluetooth to connect with people nearby and form a network so that you can communicate even when you're offline. CAA protestors have been recommending Bridgefy on Twitter, so that communication is possible even in times when there is no Internet. Of course, even if you are not part of the protests, but have been affected by the shutdown, Bridgefy appears to be a useful tool to maintain communications.

Bridgefy is available on Android and iOS as a free download. The app, once downloaded, requires an Internet connection to sync contacts. Once the contact list are synced, the app will show you all your contacts that have Bridgefy already installed. It lets you chat with friends privately within the 330 feet range, or lets you join the broadcast group to enable communication with a large group of people nearby. The more the users on the app, the longer is the range. As mentioned, more users help in expanding the network and range, and Bridgefy relies on this mesh network where messages simply jump from one person's phone to another till it reaches the recipient.

One installed, it lets you add a username, and asks for location and Bluetooth to be turned on – both vital tools for offline messaging to be a seamless process. Once contacts are synced, it shows you all the people that have already installed the app. If they are within range, you can then send a text message to the user and start a conversation. You can even share your location with the user, in the event you're at a concert or a protest, where losing your friends or acquaintances is easy and Internet could be choked. Users can even add a new contact to the app easily.

The interesting bit is the broadcast group that lets you chat with several people nearby, even if they are not on your contact list. This app is being advocated by protesters for the purpose of important announcements through this broadcast feature that will enable communication even in the event of Internet shutdowns. Apart from Internet shutdowns by the government, this app is useful in the event of natural calamities like earthquakes, or being lost in a public gathering. Other apps that offer similar services are FireChat and Briar.

Of course, in the case of the Delhi Internet shutdown, government authorities ordered Airtel, Vodafone Idea, Reliance Jio and other operators to shut down voice, mobile data, and SMS services in certain parts of Delhi. If you're affected by the shutdown, the service can be quite useful.

You can download Bridgefy via the App Store or via Google Play Store.

Internet Shut Down in Certain Areas of Delhi, Airtel and Vodafone Confirm