Instagram Reels, currently in its testing phase, will roll out in India at 7:30pm IST today. 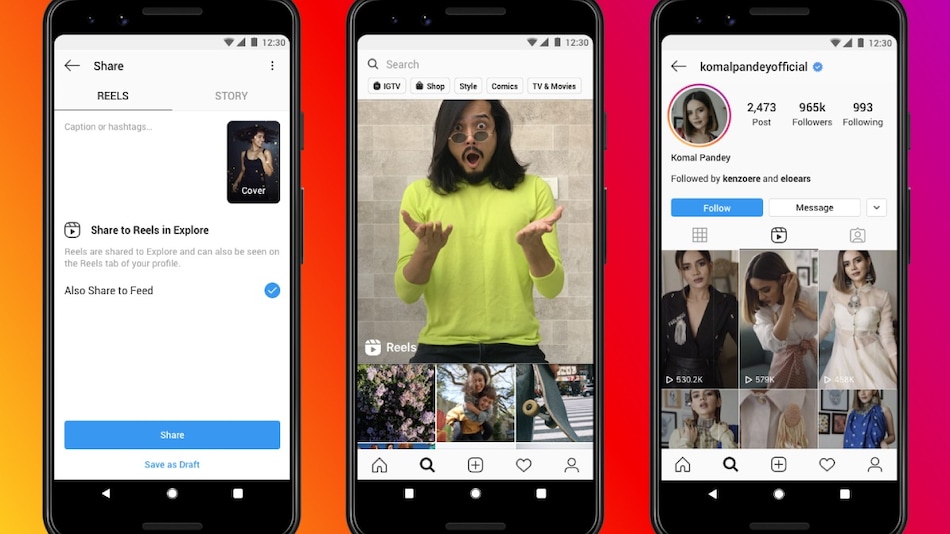 Instagram has announced that it is testing its newest short form video-sharing feature, Reels, in India. The social networking giant said that it was collaborating with several established Indian creators from popular platforms such as TikTok and YouTube to populate content on Reels. India is the fourth country after Brazil, France and Germany, where Reels is currently being tested. The feature will start rolling out for users in India starting 7:30pm IST today when users will be able to check out entertaining videos posted by creators such as Radhika Bangia, Jahnavi Dasetty aka Mahathalli, Indrani Biswas aka Wondermunna, Ammy Virk and more. This new development comes nearly a week after the government imposed TikTok ban.

The Reels feature is integrated within the Instagram app itself. To create Instagram Reels, a user would need to open the camera option in the app. After clicking on Reels from the bottom of the screen, the app throws up several easy-to-use tools to record and edit a 15-second video.

Creators can choose to use the in-app music tracks, or even use a custom audio for their videos. There are also options to speed up or slow down parts of the video. There's an Align option that helps creators maintain their position in front of the camera, while recording multiple cuts in a single video. It also has an array of augmented reality effects that can be used to make videos more fun.

While testing in other countries, Instagram received feedback from creators where they demanded a separate space to explore and post their Reels. So, the app has introduced a dedicated Reels section on the Explore page where users can check out videos from different content creators. Just like IGTV, users will also have a Reels section on their profile page, where all their content can be viewed at once.

According to Facebook India Vice President and Managing Director Ajit Mohan, videos make up a third of all Instagram posts in India. Out of that, around 45 percent of the videos posted are of 15 seconds or less.

Calling Reels as the “future of entertainment,” Facebook's Vice President of Product Vishal Shah said that the superior goal of Reels was to push Indian content creators and help them become potential “global stars.”

Instagram says that it has been working with popular content creators and public figures to populate Reels content. When the test starts rolling out, users can check out content posted by the likes of Ammy Virk (3.3 million fans on TikTok), Gippy Grewal (1.7 million), Arjun Kanungo (1.5 million), Radhika Bangia (5.4 million), RJ Abhinav (1.6 million) and Indrani Biswas aka Wonder Munna (630K subscribers on YouTube).

While still in testing phase, Instagram Reels is expected to become a solid competitor to Indian TikTok rivals such as Chingari, Mitron, Moj, and Roposo. Several TikTok creators have already moved to Instagram, asking their followers to catch up with their latest content on the app.

As of now, Instagram plans to learn more from the testing phase and from creators themselves. Monetisation options are also expected to be introduced once Reels takes off in India. No official public rollout date has been announced yet.