Instagram Introduces Ability to Save Live Video on Android and iOS 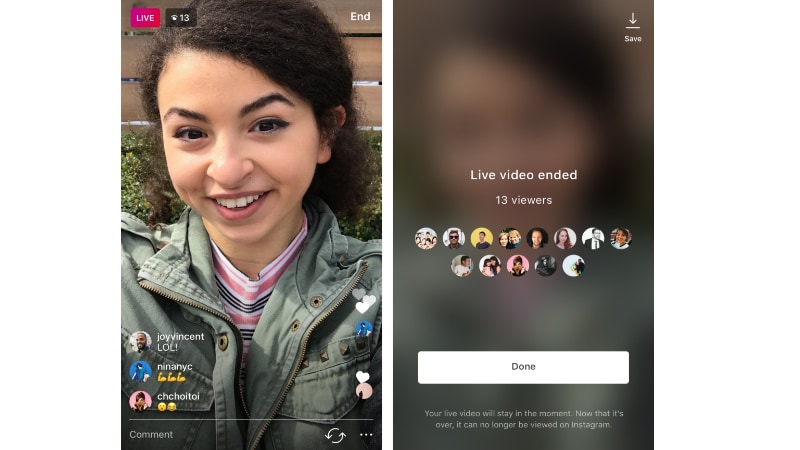 After releasing it in November last year and making it available only to users in the US, Instagram later introduced live broadcasting on Instagram Stories for users worldwide in January this year. The live video feature allowed users to go live for its followers to see real-time feed via the social app, but it disappeared the moment the live feed was ended. Now, the Facebook-owned company has announced the ability to save the live video after it's over onto your phone, for watching it again at a later date.

The option to save the Instagram live video is rolling out to all users on Android and iOS (version 10.12) via an update, and you should receive it over the next few days, if you haven't already. Once you get this feature, you will see a Save icon on the top right edge of the screen every time you end a live video on Instagram. Clicking the Save icon and tap Done to save the video into your camera roll directly. It will still continue to disappear from the app when you're done, and won't be posted or saved anywhere in-app.

This feature allows you to hold onto the live video, especially the ones you like, and share a portion of it on social media if you wish to. It's worth noting that users will only be able to save the video - not the comments, likes, number of viewers or any live interactions.

Furthermore, Android Police reports that Instagram has also rolled out two-factor authentication for more users on Android. The report claims that many users can now see a 2FA option in Settings, under the Accounts section. To enable the feature, you will have to verify your phone number by putting the six-digit security code sent by SMS. After this, Instagram will ask you to verify with SMS every time you sign-in on a new device.

The report also claims that it is unsure "if the roll out is limited to those enrolled in the beta or if it's there for everyone". In any case, you can experience the feature by joining the official beta or downloading the latest APK Mirror.