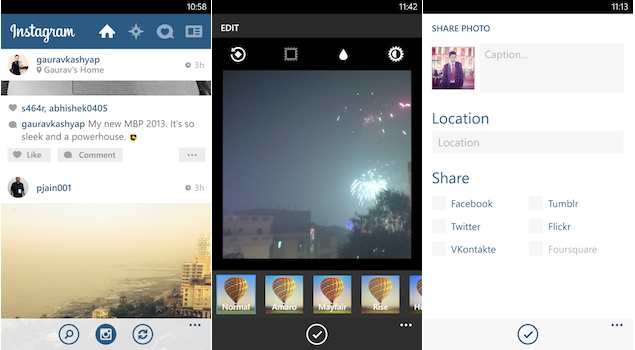 Believe it or not, but a number of people including tech pundits attributed the lack of an official Instagram client as a reason for Windows Phone devices not getting enough traction. All that changed on Wednesday, when the online photo and video sharing social service released a native app for Windows Phone 8, albeit in Beta, stripped of features like the ability to upload videos.

As with other Instagram apps, this one allows users to take pictures through the phone's front and back camera or choose them from images already stored on the phone, apply a digital filter and share them with followers on Instagram and with other social networks including Facebook, Tumblr, Twitter, Flickr, Vkontakte and Foursquare.

The app, which is now available in the Windows Phone Store, comes with Live Tile Notifications support but misses out on video sharing through which Instagram lets users share 15 seconds videos.

Unlike the Android and iOS clients, the Instagram Windows Phone client presents the option to choose existing photos when you hit the camera button and doesn't open the phone's camera, by default. You need to press a small Camera button again to take a picture.

The app was first launched in October 2010 and was initially limited to Apple's iOS till April 2012 when it arrived on Android. Although third party clients for the service have been available on Windows Phone for quite some time, API limitations prevent them from offering a full-fledged experience. Nokia had even run a campaign to get Instagram on board, and its prayers were finally heard, later this year, following which it announced that the native Instagram client for Windows Phone was arriving in a few weeks, at Nokia World, in October.
Comments