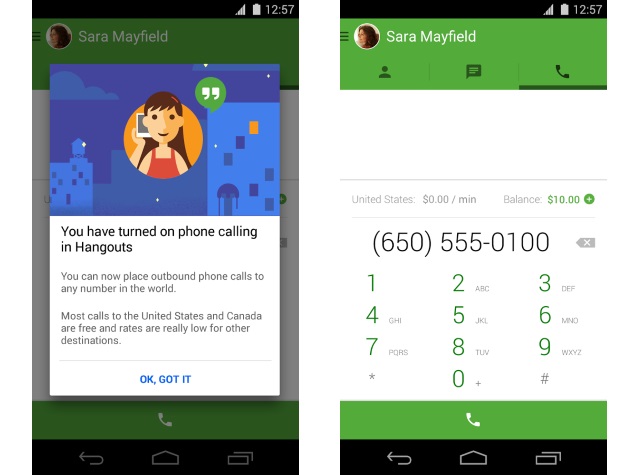 Google on Thursday announced that it will let people in India use the Hangouts app for mobile devices and the Hangouts in Gmail to make free or low-cost international voice-calls over the Internet.

Announcing the news, Google India in a Google+ post said, "Starting today, the Hangouts app on your phone will help you stay connected with your family and friends around the world in more ways than ever. Now you can make voice calls to phone numbers outside of India on Android, iOS, and the Web from Hangouts in Gmail."

The search engine giant revealed that people in India can now call international numbers in the US and Canada for free, while for other countries the rates are "really low."

"You can make and receive calls as well as get your text messages and voicemails for your Google Voice number through Hangouts. To use Google Voice with your Hangouts account, you need to have a U.S. Google Voice account and number," adds Google.

The company also announced that that the first minute of calls to 24 countries from India will be free and users will be charged for each minute after. The first minute will be free for calls to these 24 following countries - Australia, Belgium, Brazil, Canada, China, Dominican Republic, France, Germany, Indonesia, Ireland, Italy, Japan, Mexico, Netherlands, Norway, Peru, Poland, Russia, South Korea, Spain, Sweden, Switzerland, United Kingdom, and United States.

The company back in September rolled out the voice-calling feature from Hangouts app.

Home Depot Says About 53 Million Email Addresses Stolen in Breach
Germany, Brazil Push the UN to Be Tougher on Cyber-Spying