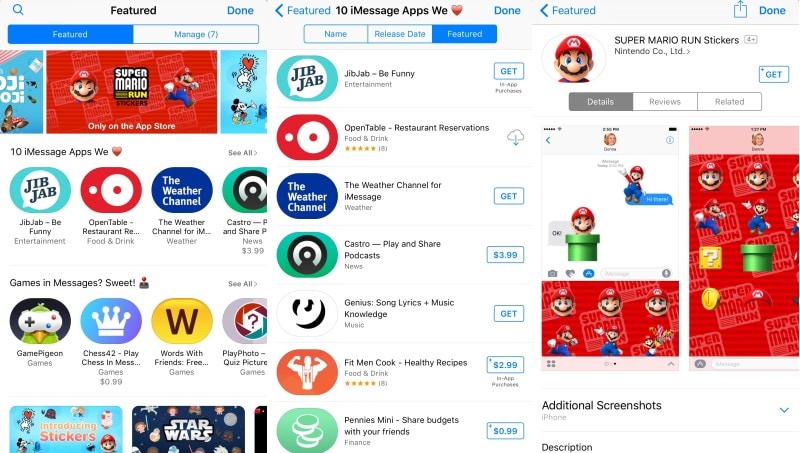 One of the biggest new features of iOS 10 that was revealed at WWDC 2016 was the iMessage App Store. Apple embraced chatbots and rich media messaging with its latest iMessage update, creating a platform for third parties to connect with users whilst also adding features like sticker packs and Invisible Ink. Just ahead of the release of iOS 10 on Tuesday, Apple has made the iMessage App Store available to iOS 10 beta testers. Regular users can expect to see the store with the public release of iOS later in the day.

The iMessage App Store has debuted with apps that were first unveiled at WWDC, including OpenTable, Square Cash, Jib Jab, The Weather Channel, GIF Keyboard, Chess42, Words With Friends, PlayPhoto, and MsgMeWordGuess. Some of these are iMessage-only apps that are visible only within the Messages app, while others are part of the full-fledged, regular iOS app.

As we mentioned, iMessage sticker packs have also become available, and apart from a whole bunch of Disney offerings ranging from Frozen to Mickey Mouse and Star Wars, users also have access to Super Mario Run stickers, which were announced just last week at the iPhone 7 launch event.

iMessage-only apps are also listed within the regular App Store carrying the ‘Only for iMessage’ moniker above the Details tab on the description page.

What do you think about Apple’s new iMessage App Store and the upgrade to the messaging platform? Are you eager to try it out? Or is it just another catch-up feature? Let us know via the comments below.