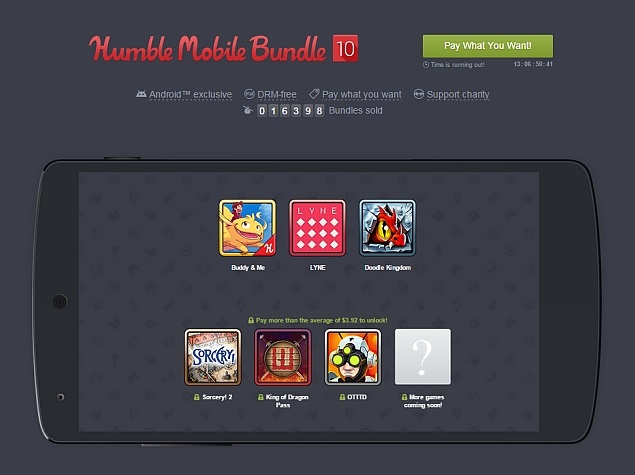 Humble Bundle has launched the Humble Mobile Bundle 10 for Android gamers. It currently features six games from different genres. The games included in the bundle are Buddy & Me, Lyne, Doodle Kingdom, Sorcery! 2, King of Dragon Pass, and OTTTD.

At the time of writing, over 16,767 bundles had been sold and payments over $65,800 (roughly Rs. 40 lakh) had been made. Users can name their price for three games, namely Buddy & Me, Lyne and Doodle Kingdom.

Users would have to pay more than the average purchase rate for the other three games, which at the time of writing was $3.92 (roughly Rs. 240), namely Sorcery! 2, King of Dragon, OTTTD, and the 'more games coming soon' that will be added to the bundle on January 26.

As before, all the games DRM-free, and users can choose how to split their payments between charities (in this bundle, World Land Trust and Extra Life), game developers, and Humble Bundle itself.

Buddy & Me is an adventure game made by Sunbreak Games that lets users jump, glide, bounce and swing through an enchanted forest. Lyne is a puzzle game created by Thomas Bowker where players have to connect the shapes and fill the board in order to unlock the next level. Doodle Kingdom by JoyBits is another puzzle game where gamers can build their own kingdom and breed four different types of Dragons.

Sorcery! 2 also falls under the adventure game genre and lets users make their own choices and decisions from a set of options to shape the story of the game according to them. King of Dragon Pass also features building of a clan, taking strategic decisions and more to expand the player's territory. OTTTD (Over The Top Tower Defence) game like Sorcery! 2 and King of Dragon Pass, is a strategy-based game. Users can choose different characters to place them alongside the tracks from where the enemy will go. The game has been created by SMG Studio.