Hoote is a multi-lingual social voice platform that is available in varied Indian languages. 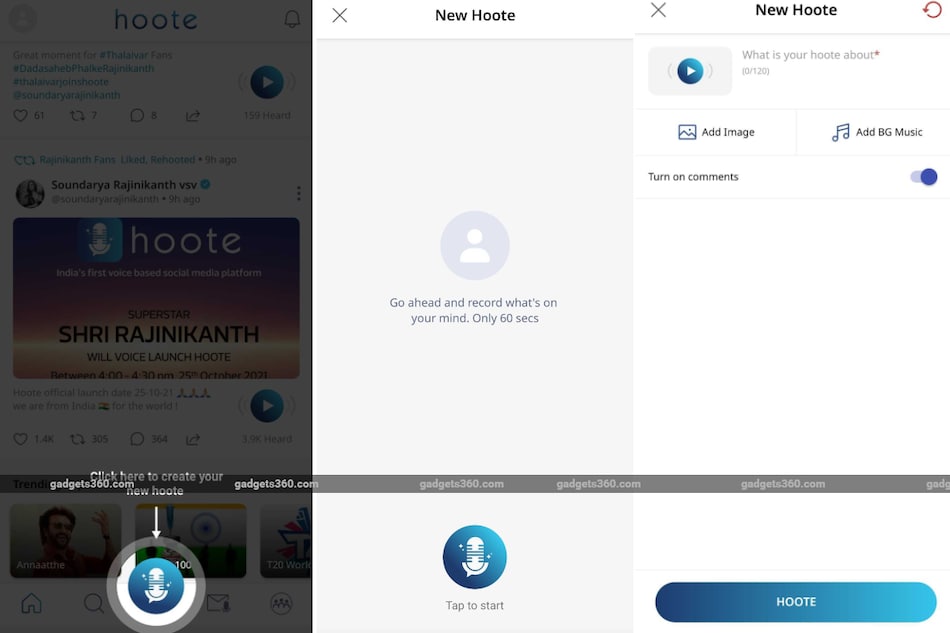 Hoote is a new voice-based social media platform, launched by film star Rajinikanth. The app has been founded by his daughter Soundarya Rajinikanth, as a voice-based social platform. Hoote is said to support eight native Indian languages, and three international ones at the moment. Indian languages include Tamil, Hindi, Telugu, Marathi, Malayalam, Kannada, Bengali, and Gujarati. The platform allows users to express themselves in voice notes, add background music to their hoote posts, and add images to better express themselves.

The Hoote app is available for download on Google Play store for free. The app asks you to choose your preferred Indian or international language on boot, and then dives directly into the registration process. It offers you options to follow celebrities like Rajinikanth, Gautam Gambhir, news channels, politicians, and fan pages as well. Hoote posts of users you follow will show up in your feed. The voice note can be paused and played easily. The Hoote post can be liked, reposted, and reshared as well. Users can even comment below the hoote postto increase engagement.

Hoote allows users to record a voice note for a maximum of up to 60 seconds only. Once the recording is done with, users can add a caption, background music, and an image to the Hoote post. The platform offers a variety of background music to choose from. The music is segregated into categories like emotions, environmental, nature, religion, and native. Users can preview these background music options to understand which one fits their voice note best.

Hoote also offers the option to keep the comments off, if needed. However, the comments are kept on by default. The caption needs to be 120 characters or less. Users can also easily delete their hoote posts from their profiles by tapping the profile icon.