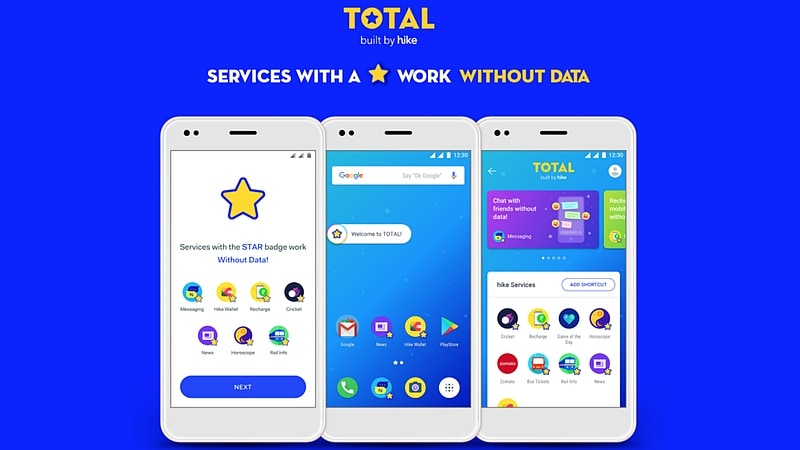 Instant messaging app Hike on Wednesday launched Total, a product that will allow users to access essential services such as messaging, news, and recharge among others without an active data connection. Hike Total - a version of Android preloaded on certain smartphones - will offer data packs to users for starting price of Re. 1, and Kavin Bharti Mittal, Founder and CEO, Hike said the company's goal is to bring more Indians online with Total. The company is using a proprietary USSD-based technology to enable use of messaging and other services without an Internet connection.

The Hike Total will be available from March 1 on Intex Aqua Lions N1, Aqua Lions T1, and Aqua Lions T1-Lite as well as Karbonn A40 Indian across Airtel, Aircel and BSNL networks. Hike Total users will also get up to Rs. 200 to spend on any of the Total services when they buy one of the select devices. Those interested in getting early access to the feature need to sign up on the dedicated Hike Total website.

Hike says Total has four key elements that make the end-to-end experience extremely seamless. Users only need to provide a single login via a phone number to access all Total services, such as messaging, news, horoscope, buying recharge, sending or receiving money in Hike wallet, cricket scores and rail information, which take between 100KB to 1MB data.

"We have taken the 15-20 step process of someone coming online and made it into only a few steps. Buy a phone, turn it on and you are good to go. Everything, all the essential services, all work out of the box even without data," Mittal said in a statement.

Kavin further added, "Our goal is to bring India online and online means data so we’ve also made it extremely simple to buy data packs right contextually inside the OS itself. We’ve worked closely with telcos on special data packs for these phones starting as low as Re. 1 to give people a taste of what it feels like. This is really powerful."