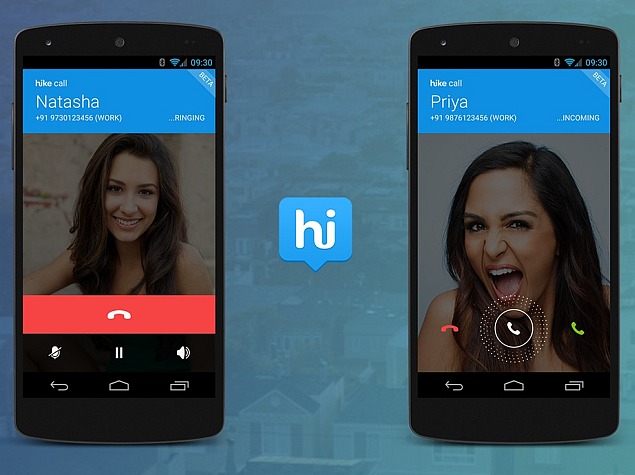 After announcing its acquisition of US-based voice-calling firm Zip Phone earlier this month, Hike Messenger on Wednesday announced the rollout of free voice calling to its Android app - 90 percent of its user base. iOS and Windows Phone users will get the 'Hike Calls' feature by the end of Q1 2015.

Hike Messenger's new free voice calling feature is meant for Hike-to-Hike calls, and can be used on 2G, 3G and Wi-Fi networks in over 200 countries. The company claims the voice calling technology it uses for Hike Calls is "extremely data efficient", promising more calling minutes per megabyte compared to competing services - an optimisation the company says is critical for markets such as India with the paucity of high-bandwidth connections.

Commenting on the launch of the calling feature, Kavin Bharti Mittal, Founder and CEO, Hike Messenger, said "While building free Hike Calls, we kept two things in mind. Firstly, India is a very cost sensitive market and as a result we've ensured that our service is extremely efficient on data. It means our users can pack in more minutes per megabyte when calling on hike. Secondly, we've made Hike's free calling service available globally in over 200 countries. Hikers from India can now speak with their loved ones in India and across the world for free."

The Hike Calls feature is not yet listed (beyond 'Surprise Surprise!') in the What's New section on the Android app's listing on Google Play, which was last updated on Friday, but already contains the feature. The company also lists a version on its site, which can be sideloaded by users.

Hike Messenger is targeting 100 million users by the end of 2015, looking for steady growth from its last published figures of 35 million users in August. Hike is a joint venture between Bharti Enterprises and SoftBank Corporation.

Financial details of Hike Messenger's Zip Phone acquisition were not revealed. Zip Phone is a one-man startup founded by Anuj Jain in the US, and offered a voice-calling app that works globally.
Comments

YouTube Finally Replaces Adobe Flash With HTML5 Video by Default
App Deals of the Week: Save Over Rs. 5,000