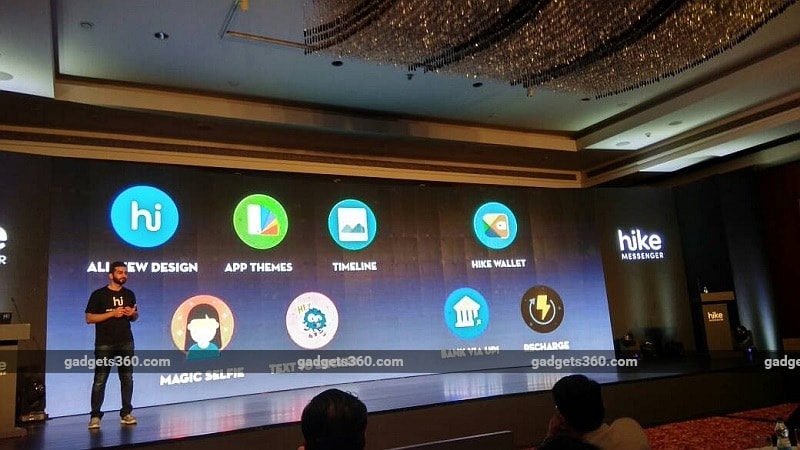 Hike Messenger on Tuesday at an event in New Delhi unveiled a completely redesigned offering with the introduction of Hike 5.0. Apart from a complete revamp, the company also launched the Hike Wallet feature, complete with UPI-based payments.

Detailing availability of the update, Hike 5.0 and its features will be rolled out to all Android and iOS users by Sunday - right now, only 5 percent of users have received the update. Notably, the new Hike Wallet feature will make its way to Android with the v5.0 update, however, the iOS app will only get it by July-end.

Let's start with the new features introduced in Hike 5.0. The company says Hike Messenger now has brand new colours and fonts. Moods can now be set as profile photos, while the old Timeline feature has made a return, and in addition to disappearing Stories, users can now post text, photos, and videos on their timeline that stay forever. Likes on posts can now be expanded to see the people who have liked it.

Other new features of Hike 5.0 include the Magic Selfie (machine learning based beautification feature), Text to Stickers (supported by all regional languages), App Themes (such as Blue, Zen, Night), Chat Themes, and Auto Night Mode. Hike also says that multiple likes are now possible on a single post by a single user.

Finally, let's come to the new payments and wallet features of Hike. Using UPI, Hike Wallet users can perform instant bank to bank transfers. This works for those recipients who are not on Hike. For those without a bank account, money transfers can be performed within the wallet itself. The company has roped in YES Bank as its banking partner.

In a statement, the company touted how Hike could help boost UPI adoption in India. "With more than 100 million registered users currently on Hike Messenger, this launch makes Hike the largest UPI based platform in India overnight," it said.

Money transfers can be initiated with Blue Packets. Detailing this, Hike says "users can choose from over 10 different beautifully crafted envelopes and also add a personalised message to it to celebrate those special occasions. A Blue Packet can be sent to an individual or even a group of friends. If you give Blue Packets to a group of your friends, you can have a little fun and select how many people in the group should get it. It works on a first come first serve basis and a Blue Packet when sent expires in 24 hours." In group chats, the Blue Packet option has a 'Surprise' option for the first opener of the packet.

Apart from money transfers, Hike 5.0 now supports prepaid recharges and postpaid bill payments. Other changes and new features being touted by the company include 128-bit SSL encryption, and performance improvements alongside a reduction of the app size from over 40MB to around 25MB.

Speaking on the launch, Kavin Bharti Mittal, Founder and CEO, Hike Messenger, said, "Over the last 6 months, we've been working to bring a brand new experience to our users with one question in mind - How do we take all the things that users love about Hike and make it even better? Hike 5.0 is our most ambitious step in that direction till date... Hike 5.0 is the biggest update we've released in the history of Hike. We've worked closely with over 100 of our top hikers to build 5.0. It's been built by our users for our users. With App themes, Night theme and Magic Selfie Hike 5.0 is packed with some incredibly personal touches that are meant to delight our users. With Hike 5.0 you can personalise your Hike world."