Apple Acting Like 'Gangsters,' Pressuring App for a Cut of Sales: Hey.com Executive

Hey.com executive calls it “personally heartbreaking” to see Apple rejecting the app from the App Store and threatening its removal. 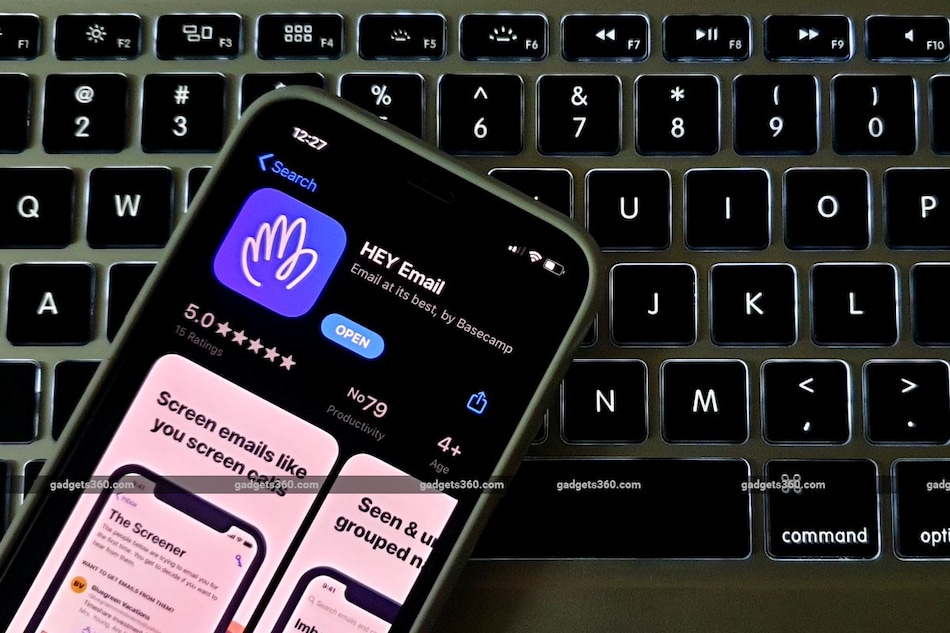 Hey email app that has been developed by software firm Basecamp, is facing a threat of removal from the App Store over not providing an in-app subscription. The Cupertino, California-based giant initially approved the app, but it rejected a subsequent bug fix update specifically for not following its guidelines that essentially restrict app developers from offering purchasing mechanisms other than in-app purchase. Apple takes a cut from all purchases made via App Store or in-app purchases. Basecamp CTO David Heinemeier Hansson has called Apple's action an “abusive behaviour” towards developers and a way to ask for a “ransom” to get an app approved on the App Store.

Hansson took the issue to Twitter and said that it was “personally heartbreaking” to see Apple rejecting the Hey email app updates from the App Store and threatening its removal over not providing the in-app purchase mechanism.

The Hey email app requires a subscription that's $99 (roughly Rs. 7,500) to get the newly launched email service on an annual basis. However, it doesn't include an in-app subscription option. The app even doesn't allow users to sign up for the service and asks them to create their account from its website. This is something that Apple apparently doesn't like at all.

“We noticed that your app allows customers to access content, subscriptions, or features they have purchased elsewhere, but those items were not available as in-app purchases within the app. Specifically, users access your paid email services,” Apple said in the rejection letter sent to Basecamps lead iOS developer Zach Waugh, a copy of which has been posted by Hansson on Twitter.

The initial version of the Hey email app was approved by the App Store team on Friday. The Basecamp team, thus, announced the launch on Monday. However, the first bug fix update — the version 1.0.1 — that was released to address some initial issues got rejected on Monday itself. The team at Basecamp posted a second version that was also rejected on Tuesday. Apple's App Store team cited rule 3.1.1 of its guidelines for app developers for rejecting the app twice in just two days' time frame.

The fight against 30-percent cut
Apple collects a 15 to 30 percent commission from in-app purchases, as defined on the Principles and Practices page of the App Store. Basecamp's Hansson called it an “outrageous demand.”

“I will burn this house down myself, before I let gangsters like that spin it for spoils. This is profoundly, perversely abusive and unfair,” he said in a Twitter thread posted in response to Apple's rejection.

The Hey email app is notably not the first app that is trying to avoid the 30-percent cut that Apple takes to offer in-app purchase support. Spotify abandoned in-app subscriptions on its iOS app back in 2016. Netflix also took a similar move in 2018 and started bypassing in-app purchases on its iOS version. Last year, Spotify even took the issue to the European Union and said that it was forced to raise the monthly fee of its premium service as Apple was charging the commission for enabling in-app subscription.

Apple told The Verge that while the company does make exceptions for apps such as music, video, and magazine aps, email apps on the App Store must offer an in-app subscription option. However, it is important to note that email apps including Newton and Spark are still on the App Store but without using its in-app subscription mechanism. The native Basecamp app is also amongst the exceptions that don't provide any in-app purchases and requires users to visit its site for subscriptions.

“Apple sees no need to even justify these discrepancies, because this is what ultimate market power affords you. Apple's review literally said on the phone, when we raised these objections: ‘We are not going to talk about other apps'. Abusive is case by case,” Hansson said in a tweet.

While responding to a query on the rejection of recent Hey email app updates, Apple told Protocol that it shouldn't have been approved in the first place.

Many developers echoed the outrage that Hansson took to Twitter and said they all were also facing issues with the App Store reviews when not offering in-app purchases.

Wrong timing?
The Hey app rejection comes amid the ongoing European Union's antitrust investigations into its App Store and Apple Pay service. The regulator stated it appears that Apple obtained a “gatekeeper” role for distributing apps and content to users through its devices. Hansson of Basecamp noted that Apple's take against the Hey app in the midst of the investigations shows that it has no fear of regulatory consequences.

“It's clear that Apple feel[s] like they're now so far above the trifling concerns of antitrust law that even while under the scrutiny of regulators and justice departments on two continents, they can still afford to tighten the screws,” he said.