HDFC Mobile Banking App Down Again, Customers Should Use Netbanking for Now

HDFC Mobile Banking app is down, but debit card payments are working. 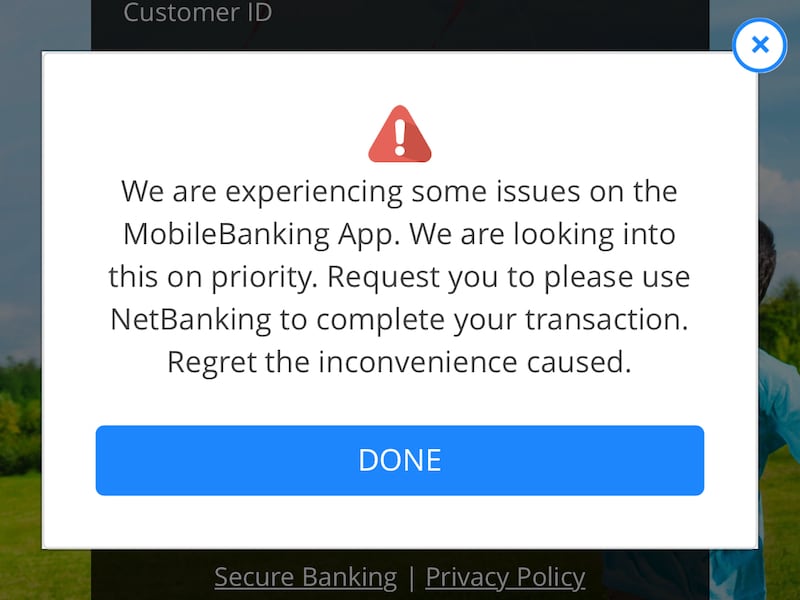 HDFC Mobile Banking app is down again and the bank has suggested that customers instead make use of netbanking to complete any transactions. The outage seems to have started around 11:30am on Tuesday, June 15, and it appears that the issues are happening unevenly — three Gadgets 360 team members got an error message while trying to access the app, while it was opening normally for two persons.

[Update, June 15, 1.42pm: HDFC has now tweeted that the issue has been resolved and the mobile banking app is working again. However, the bank did not give any details about what the issue was.]

As of now, the bank has not given any statement about what the cause of this issue was, only saying that it is looking into the issue. However, debit card payments and netbanking both seem to be working at the moment - only the Mobile banking app appears to have been affected. A tweet by HDFC's corporate communications head said, "We are experiencing some issues on the MobileBanking App. We are looking into this on priority and will update shortly. Customers are requested to please use NetBanking to complete their transaction. Regret the inconvenience caused. Thank you." The official HDFC Bank News handle also posted a similar tweet:

We are experiencing some issues on the MobileBanking App. We are looking into this on priority and will update shortly. Customers are requested to please use NetBanking to complete their transaction. Regret the inconvenience caused. Thank you.

As of now the reason for this outage is not clear, but according to service outage tracker DownDetector.in, there was a spike in reports of problems with HDFC Bank from around 10:30am, peaking at 11:30am. However, the problem does not seem to be evenly spread as some members of our team who are customers of HDFC bank were able to access their accounts as usual.

This is part of a number of similar incidents that have affected India's online banking sector; HDFC had similar glitches in March, and a huge outage in November. ICICI Bank also experienced a similar outage earlier, and at an industry conclave in March, Reserve Bank Governor Shaktikanta Das had to urge banks to strengthen cyber security and tech infrastructure.