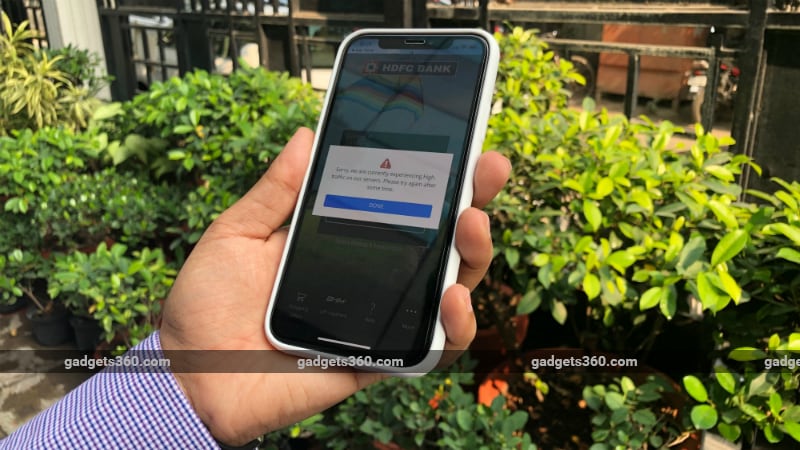 Indian banking and financial services company HDFC Bank on Tuesday announced the launch of its next-gen mobile banking app that brings a revamped interface and additional functionality, at an event in New Delhi. However, things seem to be going downhill (no pun intended) for the Mumbai-headquartered private bank as its redesigned app has been down on both Android and iOS for the past 48 hours now, ever since launch. Adding to that, the bank also silently removed its older mobile banking app from Google Play and Apple App Store soon after the announcement.

HDFC Bank customers have been facing “high traffic” issues ever since the older HDFC Bank mobile banking app was replaced with the new one. Notably, the next-gen app has been available for download for the past few months, however now has completely taken over as the only one that offers HDFC Bank mobile banking facilities. On Twitter, a significant number of users have reported similar issues which Gadgets 360 has independently verified. According to most users, the same “Sorry, we are currently experiencing high traffic on our servers. Please try again after some time” error message gets shown when they try to login using their customer ID and password.

Upon contacting HDFC Bank, a company spokesperson issued an official apology and shared with us this statement. “Following the launch of our new Mobilebanking app, we have been experiencing extremely heavy traffic on this channel. Due to this, some customers are unable to log in to the Mobilebanking app. We are aware of this issue and our teams are working round the clock to resolve it.”

Interestingly enough, HDFC Bank hasn't yet provided us with an official timeline for the redressal of the outage. It does, however, recommend customers to access their accounts by using the Netbanking, Missed Call banking, or Phonebanking platforms. Alternatively, users can visit their nearest HDFC Bank branch for banking services.

The magnitude of this issue appears significant when you consider that millions of the bank's customers are unable to access their funds - totalling billions of rupees - on an official mobile app. Sure, there are alternatives like phone banking and missed call banking, but none offering the ability to visually access the funds without using a PC or using the desktop mode of the website on your phone.

We tried out the HDFC Bank MobileBanking Lite app on both Android and iOS, however it offers limited functionality restricted to the Phonebanking features linked to your account.

We have reached out to HDFC Bank requesting a clarification on the sudden disappearance of the older, working mobile banking app. Gadgets 360 has also reached out to cyber-security firms Kaspersky Labs and Quick Heal to get insights on HDFC Bank mobile app outage, and will update the story accordingly.

At the time of press, HDFC Bank's Securities MobileTrading app is operational on both major mobile platforms (Android and iOS) and users are able to access their equity and debt investments (mutual funds, stocks, ETFs, etc.) through it.

Update: HDFC has pulled its Mobilebanking app from the App Store and Google Play since this story was published.