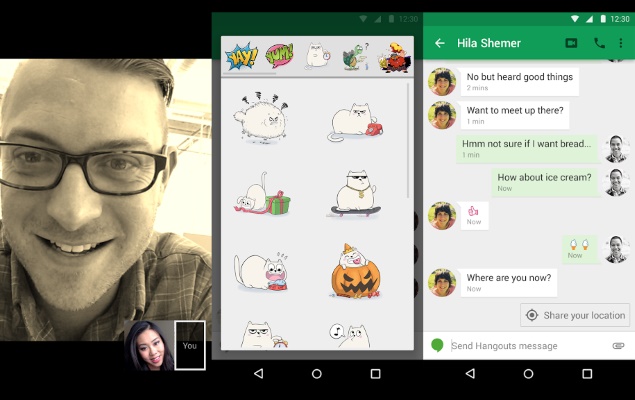 Google on Wednesday started updating Hangouts for Android with new sticker packs, video filters, last seen, smart suggestions, and more. The company has said that these updates will also be available on the Hangouts iOS app soon.

Starting with the text and video chat, the Hangouts for Android will include 16 new sticker packs ranging from "penguins to pirates, koalas to cats". For video, the app will have new video filters that include modes like sepia, vignette, black & white, and more. Users will just need to swipe during a video call to try these new styles, says Google.

If users confirm their phone numbers in Hangouts, their discovery via phone digits will be easier in search. Additionally, Google has also added a new WhatsApp-like 'last seen' timestamp for Hangouts, which will roll out in waves over the next few weeks.

Lastly, the company says that the updated Hangouts for Android will show smart suggestions right in the conversations, which is similar to Google Calendar, Google Now cards and others, where it offers suggestions and even brings up features based on the user interest or searched query.

"When you're trying to meet up with friends in real life and someone asks, 'Where are you?', Hangouts can now understand what you need and offer to help. You'll see a one-tap option to share your location right in the conversation, without you needing to hunt around in a map, drop a pin and send your position," noted Rhett Robinson on Google+ post, taking about the new smart suggestions feature.
Comments