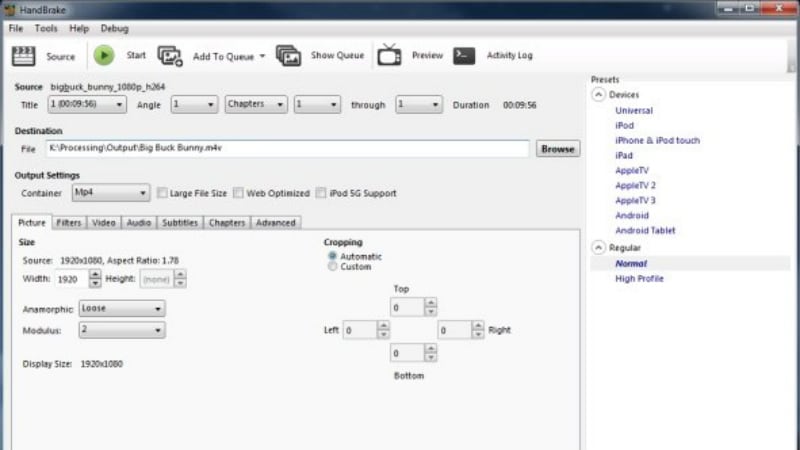 HandBrake, a popular open-source video transcoding app that is available on Windows, Mac, and Linux, has received a new update almost two years after it got updated to version 1.0. The new version, HandBrake 1.1.0, brings a redesigned user interface as well as new and improved official presets, including 4K device presets for Apple TV, Chromecast, Fire TV, and Roku. The updated transcoder also has tons of performance improvements and bug fixes and various platform-specific features.

Among other new features, HandBrake 1.1.0 has an improved main window that supports drag and drop of files and includes the new preset controls in the main workflow. The interface also has a new summary tab that defines settings at a glance. Further, there are updated interface icons that support high-resolution displays. The overall workflow also now moves top to bottom and left to right to deliver a more symmetrical user experience than before.

In addition to the improved user interface, HandBrake 1.1.0 includes a bunch of new and improved presents. There are new presets for Vimeo and YouTube, 2160p/ 4K device presets for Apple TV, Chromecast, Fire TV, and Roku, and new Production presets for post-production video editing workflows. Similarly, there are additional 2160/ 4K Matroska presets to let you export 4K videos using the Matroska (mkv) container.

The updated HandBrake software additionally has improved Apple TV 4K support. There are improvements towards the original Intel QuickSync Video support. These enable an experimental compatibility with Linux systems and 10-bit H.265/HEVC encoding support for Kaby Lake and newer CPUs. The HandBrake team has also added support for a variety of GPUs via D3D11 encode path.

Coming towards the platform-specific features, HandBrake 1.1.0 has improved support for Apple's VoiceOver navigation. You can also experience overall stability derived from the bug fixes and improvements that the HandBrake team has added for Mac devices.

Linux users, on the other hand, can now install HandBrake on systems running Ubuntu 18.04 and 17.10, though it's no longer supported for Ubuntu 15.04. For Windows machines, there are options to play a sound in MP3 or WAV format when encode or queue is finished and show progress, pass, passcount in the application title or task tray icon tooltip. The Windows version of HandBrake 1.1.0 also has support for per-display resolution awareness and running the app in a portable mode. There are improved audio selection behaviour controls and a tweaked UI consistency throughout. Furthermore, the HandBrake team has also added an option to configure low display space warning level across all the three platforms.

You can download the HandBrake 1.1.0 app on your system by visiting the HandBrake site. You can also view the detailed documentation of the software to understand its functionality.