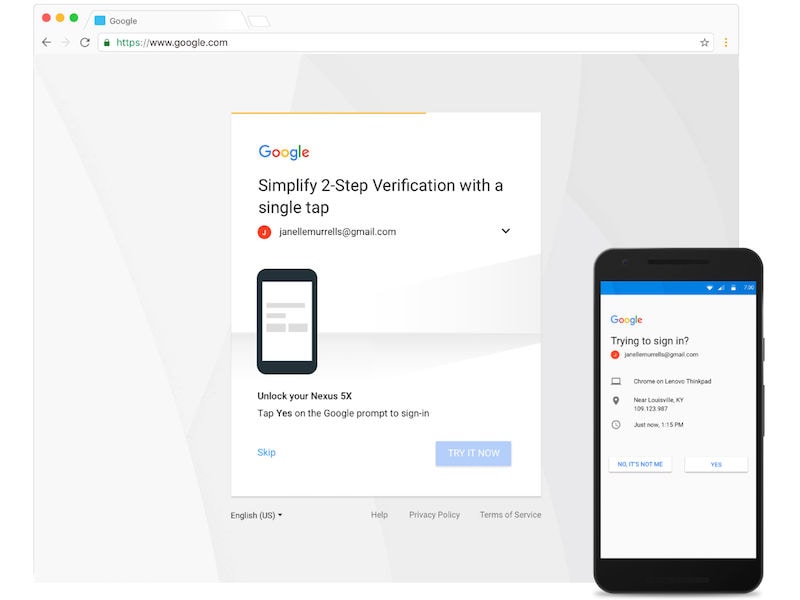 There have been plenty of cyber-attacks in the recent past that would make anyone feel the need to add some additional security measures to protect their digital information. Two-step verification (2-SV) aka two-factor authentication is one of these measures being used by tech giants like Google, Microsoft and Apple over the past few years. Google, in particular, tried to make the whole two-step authentication process simpler last year by introducing 'prompt', which does not require users to input an SMS code. But there are some users who still prefer the old SMS route, and for them, Google has a plan to shift them to Prompts.

Starting next week, SMS 2-step verification users will see an invitation to try out Google prompts when the try to sign into, say Gmail, so that they are informed about the new alternative. Essentially, Google prompts simplifies the two-step verification process by removing the need to enter an OTP sent as SMS every time a user is trying to sign into a device. The prompt verification, instead, simply brings a pop-up on a user's phone with a message "Are you trying to sign-in?" Followed by the device and location from where the sign in is taking place. The approval prompt gives a simple "Yes" or "No, It's Not Me" option, which a lot simpler than having to input a code.

Google says that one of the reasons behind pushing users to shift SMS two-step verification users to prompt is due to security concerns as text messages and one-time codes are more susceptible to phishing attempts by attackers. "By relying on account authentication instead of SMS, administrators can be sure that their mobile policies will be enforced on the device and authentication is happening through an encrypted connection," Google says.

The tech giant also updated prompt in February to show more information such as the name and location of the device attempting to sign into your account. For those still using SMS codes, expect to see the prompts preview starting next week. The prompt feature is available to Android as well as iOS users, although iOS users will need the Google search app installed to use prompts.