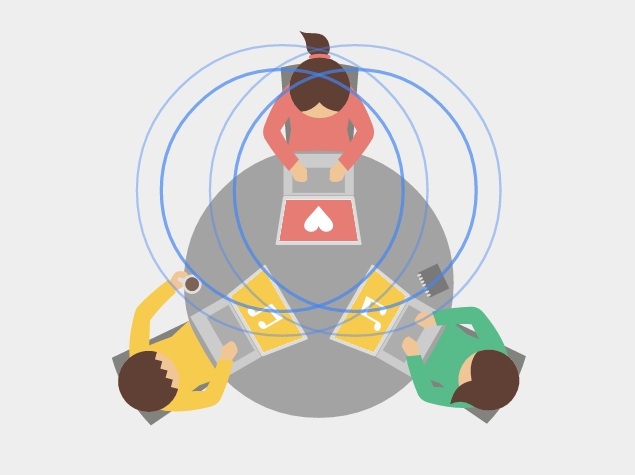 Google has released an experimental Chrome extension for PCs that allows users to share URLs between computers over audio. It works with PCs in the same room, and over voice and video chats in Hangouts.

Explaining the need for such an extension, the Google Research blog post on Tuesday said, "Tone grew out of the idea that while digital communication methods like email and chat have made it infinitely easier, cheaper, and faster to share things with people across the globe, they've actually made it more complicated to share things with the people standing right next to you. Tone aims to make sharing digital things with nearby people as easy as talking to them."

The company adds that while the first version of the extension was built as a lark, it quickly become the go-to URL sharing medium at the Google office, especially in meetings. While initially the audio transmission's frequency was kept out of the human hearing range, engineers later realised that since most laptop and video conference microphones are optimised for human voice, using a 'minimal DTMF-based audible codec' was most reliable.

To start sharing URLs with computers in the same room, or over Hangouts, users need to install the Google Tone extension, sign into their Google account, and then open a tab in the Chrome browser of the link to be shared. After ensuring their speaker volume is at an audible level, users can click the blue Tone button on the right of the omni bar to play out a sound sequence. Machines in range with integrated or attached microphones that also have the Google Tone extension installed will then receive a browser notification (along with the sender's Google Profile picture and name), which if clicked will take users to the URL shared in a new tab.

Most notably, once installed (and with the Chrome browser open) the Google Tone extension will turn on the microphone and keep it on. The only way to turn it off is to close the browser, or turn off the extension via browser settings.

Google also notes that the URL being shared is temporarily stored on Google's servers, and adds the extension collects anonymous usage data in accordance with the firm's privacy policy.

Elaborating on the security of the experimental Google Tone extension, the Mountain View giant said, "Google Tone only broadcasts URLs, so recipients do not automatically gain access to a page to which they wouldn't ordinarily have access. If you broadcast your Gmail inbox URL, for example, recipients who click on the Google Tone notification will be prompted to log in to their Gmail. However, Google Tone broadcasts are public by design, so it's best not to use them to exchange confidential information."

The company adds that Google Tone may not work in loud environments, across large distances, over poor Internet connections, or on machines without microphones or with incompatible microphones.

We tried the extension, and it worked fine between two Windows laptops. Did it work for you as well? Let us know your usage experience in the comments section below.
Comments