Google Tipped to Revamp Its Launcher for Nexus Devices 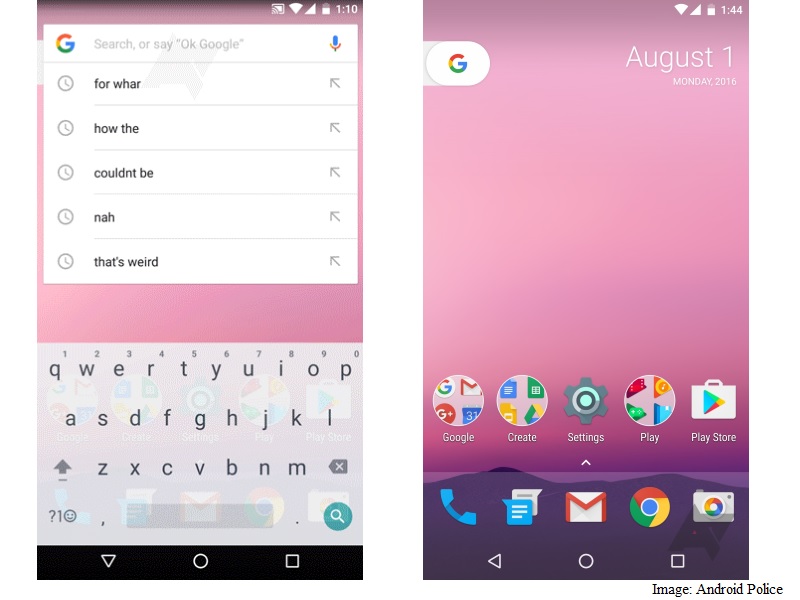 Highlights
Google is anticipated to release Android 7.0 Nougat soon, alongside new Nexus phones - the platform lead devices for the new version of Android. Alongside, we can expect several new features, and the latest leak tips that Google is revamping the Google Now Launcher that ships with Nexus devices and is also available via Google Play.

According to leaks, Google might be doing away with its app drawer icon and Google Search bar on home screen in its redesigned launcher for its upcoming Nexus phones. It is uncertain whether Google will bring the new features to the Google Now Launcher for non-Nexus devices, and not just for the upcoming Nexus phones that are codenamed 'Marlin' and 'Sailfish'.

Android Police has got its hands on some images that suggest that the California-based search giant might be finally doing away with the app drawer icon. As per the leaks, in order to access the apps, you will have to pull up the 'frosted area' on which the home screen dock sits, or tap the arrow above the dock. Both actions open the app drawer.

Another interesting feature that can be found missing in the launcher is Google's search bar which has almost become synonymous with the Android platform. Instead of a search bar, there is a non-removable calendar widget on the top right of the primary homescreen, while on the left, there is a G-icon pull-tab. Tapping on the tab allows users to utilise Google's search functionality as usual, while swiping on the tab from left to right, or even swiping the left pane of the primary home screen, pulls out the Google Now section. This swipe functionality for the Google app on the home screen can be switched off via launcher settings when one long-presses the home screen.

Although these leaks seem genuine, it should be noted that several changes can be expected in the final build as the launcher is not running on final Android 7.0 Nougat software and Google can further make changes to the launcher before its release. The Google Search app is expected to be updated with new features alongside, while the addition of Google Assistant functionality will bring in several other changes as pointed out by Android Police. Also anticipated is a revamping of the home button to a more colourful, flower-like design in the colours of Google's logo.
Comments