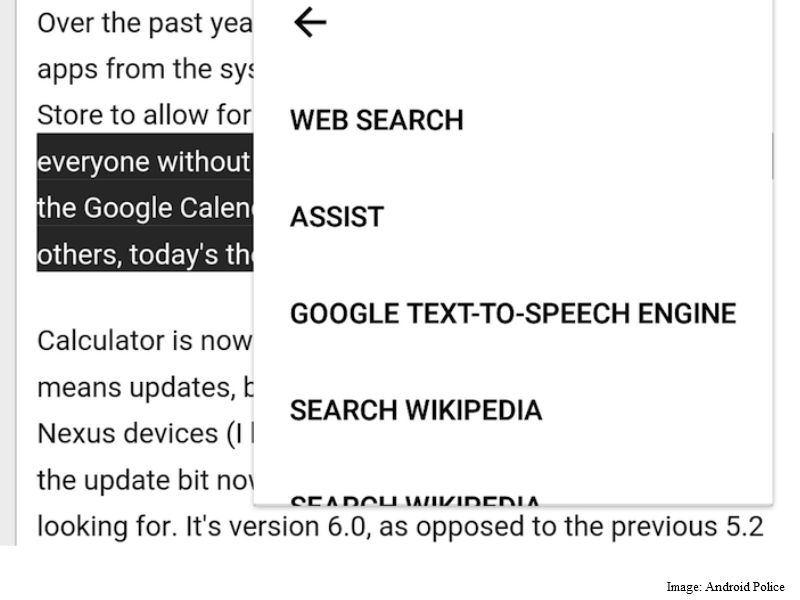 The latest version of Google Text-to-Speech (TTS) brings new languages, and the ability to speak selected text from within any app, across the Android UI. Version 3.9.6 of TTS isn't available on Google Play yet, and is currently bundled only with Android N Developer Preview 3, however, it offers full functionality if installed on Marshmallow.

The floating text selection toolbar introduced in Android M shows a pop-up box with various options like cut, copy paste, once any text is selected. There is also an overflow menu which houses apps like Google Translate, Assist, Wikipedia, Search, and now even Google TTS.

With this version, TTS will show up as an option in the floating toolbar called Google Text-to-Speech Engine. Once the option is selected, the text will be read out loud through the smartphone. This will help users learn pronounciation of certain tricky words, and even consume TLDR articles without looking at their smartphones. If users want to change the rate of speech, languages, voice sets, and more, they'll have to do that separately via Settings>Language and Input>Text-to-speech output.

The new version adds Swedish and Vietnamese languages among the other supported languages in the app. These languages can be set manually, or the smartphone will detect the default language and select the corresponding language within the app automatically.

As mentioned earlier, the new 3.9.6 TTS version is bundled inside Android N Developer Preview 3. However, the Google-signed apk file can be sideloaded (via Android Police) from APK Mirror. The latest preview was announced at I/O with several improvements. It's claimed to be Google's first beta quality release, and comes with improved graphics and runtime performance.