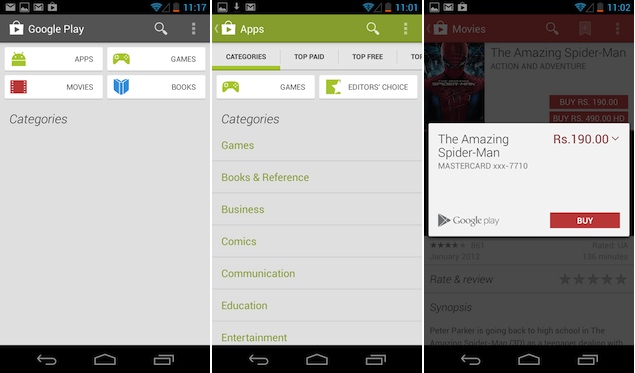 Following a number of earlier leaks, Google has officially announced that it has started rolling out a redesigned Google Play store on Android phones and tablets. The new version of the Play store app has already started rolling out for Android phones and tablets running Android 2.2 (Froyo) and above and would reach all devices over the next few weeks.

According to Google, the redesigned Play Store is simple, fast and is focused on aiding discovery of entertainment content.

The homepage offers main categories - Apps, Games, Movies and Books (in the Indian market) and featured or promotional content . At the time of writing this post, we did not see featured content. This might be due to the fact that Google has still not officially rolled out the new Play Store here. Different categories bear different colour themes, for instance Apps listings are green while Movie listings are blue.

The new design offers bigger images and more white space and is in line with the new Holo design language. Listings look similar to Google Now cards and even the payment prompt looks like a card. Google mentions that similarly themed content will now be grouped together across different sections of the Play Store. For instance if there's a movie or an app related to a book that the user is browsing through on the Store, it would also be listed along with it.

The app also offers continuous scrolling, showing recommendations as one scrolls down. Google also claims to have simplified the purchase process on the Play Store for quicker checkouts.
Comments