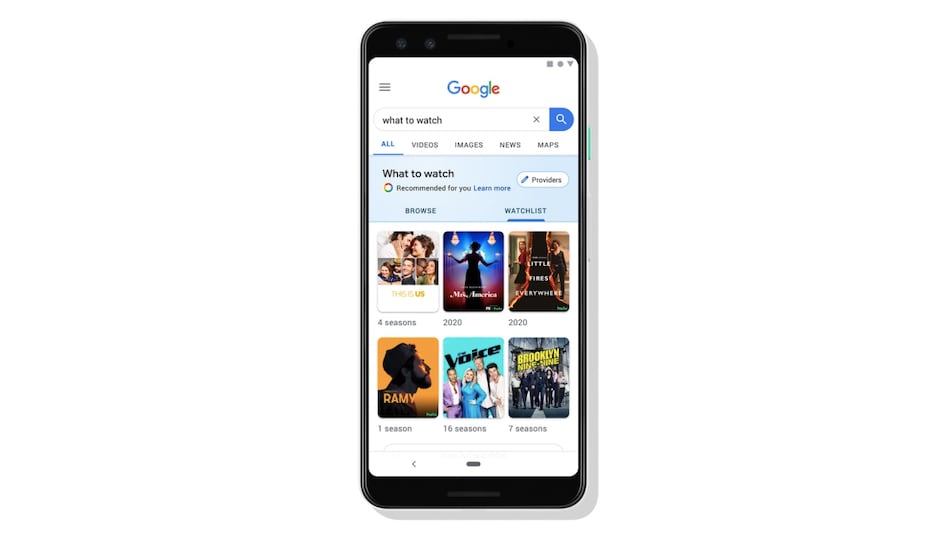 Keep track of the movies you want to watch with Google Search.

Google's suite of products have been particularly important as more people stay at home amidst global lockdowns due to the coronavirus pandemic. The company is now rolling out new features for some of its products in an effort to help people stay connected as well as access information and entertainment while staying at home. The new features are rolling out now or set to roll out in the coming days for Google Search and Android TV, primarily.

Among the various announcements by Google on its official blog, the most important one is related to Google Search that is now offering the ability to add movies and TV shows to a watchlist. Users can browse through recommendations by searching ‘What to watch' through Google Search, and add specific titles to the watchlist through the title's preview page. It's also possible to quickly switch between the list of recommendations and watchlist, as well as mark certain titles as ‘watched'. The new feature is available on the Google app for mobile devices at the moment.

This is the not the first time we are hearing about Google's watchlist. The feature was first spotted in December last year and was limited to certain markets. Google has finally made it official.

There are also new features rolling out for Android TV, Google's purpose-built operating system for televisions and streaming devices. The platform will now have three new rows featuring content from YouTube, meant to help users access information and entertainment while at home. The first provides curated news videos on COVID-19 from leading news providers; the second is on various videos that encourage activity while at home such as cooking, exercising, or listening to music; the third shows a list of movies available to watch on YouTube for free (with ads).

Various other deals and offers have been announced as well, including an extension to the Google Play Pass trial period, better organisation of apps on the Google Play Store for Android TV, and free access to Stadia Pro for users in 14 countries for two months. The new features aren't visible to us just yet, but are expected to be available in the coming days.