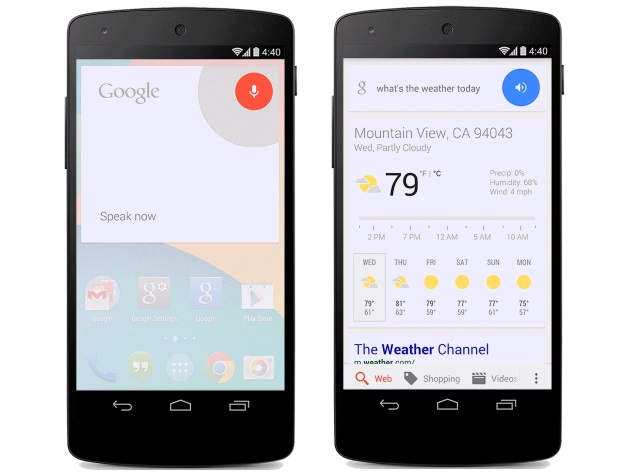 Google Search for Android has received an update that brings multilingual voice search capabilities. The Mountain View giant on Thursday announced the update, giving users the ability to add up to five languages as default language, compared to just one earlier, allowing them to give Google Now voice commands including search in multiple languages without switching.

The company made the announcement in blog post that stressed on the fact "For many people out there, speaking just one language isn't enough" announced the news. Google, however, revealed that the multilingual voice search is only available with the latest Search app version 3.6, which was globally announced earlier this month and is still gradually rolling out. As of now, Google Play in India still lists the older updated version with the app last on August 12.

Earlier, while voice search was available in 50 languages, the user had to change settings every time before the Search app detected the spoken language. For using the latest feature, an Android user will have to tweak few settings, open Google Settings from device's apps menu, tap Search and Now -> Voice -> Languages, and select languages.

The company clearly notes that the new multilingual voice search will work best if a user sticks to one language per sentence for now. Google also said users will receive a spoken response form the Search app depending on the language used and the query. The company also promises that more languages support and features will be added over time.

The official blog post said, "With the Google Search app on Android, you can speak in multiple languages and Google will understand you no matter which one you choose. So you can fire off a search for nearby restaurants in English, then dictate a text to your friend in French. You can use voice search in more than 50 languages and dialects already, but previously you had to change your settings if you wanted to switch languages. Now, you can just make a small, one-time change to your settings, and then you can switch back and forth easily. Google will automatically detect which language you're using."

Back in June, a Google Now's lead software engineer had said that Google was working on adding support for seven languages simultaneously to the search app. Shortly after, the roll-out of the feature was delayed to sometime this American summer due to software problems discovered in the final testing phase. Evidently, with the current release of the Search app with support for only 5 simultaneous default languages, Google decided to limit the feature to avoid difficulties.

In the past few months, the Google Search has been updated to add new features such as showing alternatives for delayed flights; offering details about places nearby your hotel; alerting users when to get off public transport at the stop nearest to the saved destination, and more.

Researchers Hack Into Gmail and Other Apps With 92 Percent Accuracy
Is This Voice Recording Authentic? New Tech Could Answer the Question