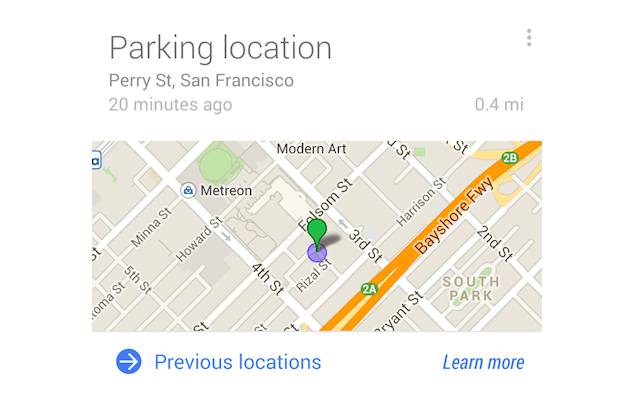 If you often struggle to find your parked car in a crowded parking lot, then a new feature of Google Now in the updated Search app for Android will be useful for you. The update to the Google Search app (version 3.4) has also brought some other features, such as new reminders, a centralised list of nicknames, and more.

The update to Google Search bringing the 'Parking location' card to Google Now has not yet been rolled-out to the Google Play store, however, Android Police has the signed apk available for download. The apk will upgrade the existing Google Search app, though we recommend you to update it once it's available via Google Play in your region.

The update brings the ability to automatically detect where users have parked their cars, and find the approximate location later, displayed in the parking location card on Google Now. It also keeps the previous location data where a user had recently parked the car, but Google notes in its blog that the information remains private and isn't shared with anyone else.

The automatic parking detection can lead to a few false positives, showing users where they've parked even if they just used a bus, because Google uses the smartphone's location sensors, and detects when a user leaves any moving vehicle.

Keeping that in mind Google has already detailed the steps in a support post with which users can customise parking location cards in terms of when it should pop-up, and can even turn it off.

Other than the Parking location card feature, Android Police notes the updated Google Search app brings a new centralized list for nicknames under "Accounts & privacy", a new reminders interface with better arrangement of past reminders, and the integration of 'Help' and 'Send feedback' into a single 'Help & feedback'. The updated app also allows some settings to be opened by voice, and allows removes the clearing of cards when switching to offline mode.
Comments