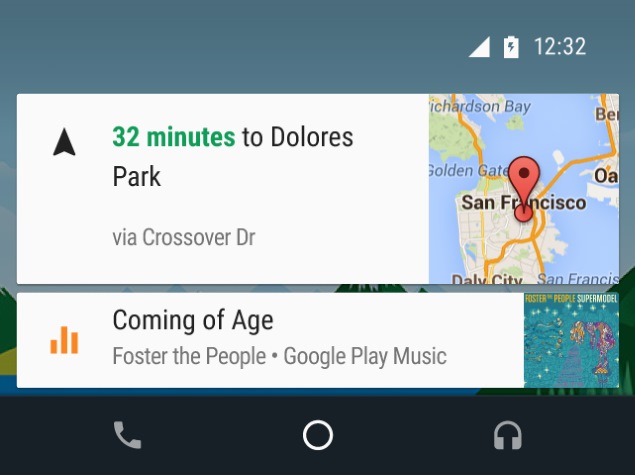 After unveiling Android Auto in June and distributing developer APIs in November last year, Google on Tuesday has finally launched a consumer version of the Android Auto app on Google Play.

The Android Auto app is compatible with Android 5.0 Lollipop and higher devices, and recently launched Pioneer head units/ dashboard products, said Google. At present, Android Auto is only supported for users in the US, UK and Australia, and Google is looking to add more partners soon.

With the update, Google Docs, Sheets, and Slides apps have got the ability to go full screen during scrolling. Now users can now either double-tap on the current document or once on the Material Design-themed pencil at the bottom-right corner to edit the document.

Alongside, Google has updated the Quickoffice app to limit its functionality before finally taking it away from users. The app now uses individual Google Docs, Sheets, Slides apps to edit documents, and if none of the individual apps is installed Quickoffice notes that it is no longer supported, and has been replaced by Docs, Slides, and Sheets apps, prompting users to download them.

For the YouTube app, the updated version 10.10 brings a new 4K video search filter, some filter options for video uploaders, as well as some changes to the video editing interface.

On the other hand, Google has updated the Maps app to version 9.6, bringing new toggle in the Navigation settings menu that will allow users to choose between turn-by-turn voice navigation through the device's speakers or via a Bluetooth connection and some design tweaks to the app.

With Google Play Music version 5.8.1836R, Google has brought the YouTube music videos in the app's search results. Users can also see all albums in My Library without the need to tap on More.

Lastly the Inbox by Gmail app version 1.4 available on Google Play now reportedly allows Google Apps users with invites to access the service. Google hasn't yet announced anything regarding the same.