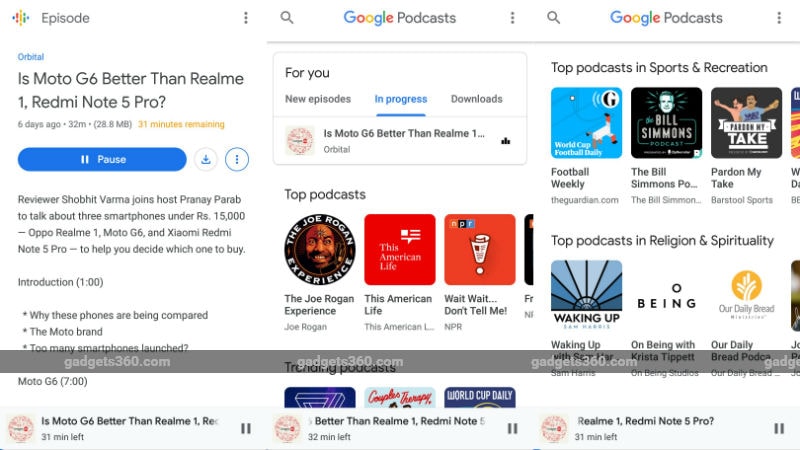 Google has finally unveiled its new standalone podcasts app for Android, called Google Podcasts. The new mobile application uses Google's recommendation algorithms to suggest shows to users based on their listening habits. Previously, the search giant never really had a great solution for podcasts as Android users had to look for other apps to manage their subscriptions. It did not have a dedicated podcast management app outside of Google Play Music. Though in April this year, Google had rolled out a new feature where Android users could listen and subscribe to podcasts directly from Google Search, without the need for any app installation. Since then, Google has been rapidly iterating on the feature and has now officially launched Google Podcasts.

Users will be able to search and subscribe to podcasts and Google has included a library of podcasts where almost everything is available. Episodes of a subscribed podcasts can be downloaded for offline playback as well. Notably, the progress gets synced across the user's Google account and they can also continue playing on the Google Home from where it was left off.

Similar to the recently launched Google Tasks, the Podcasts app appears to be quite minimalist in terms of design. It welcomes the user with a section called For You, which includes new episodes of podcasts that have been subscribed to, and a separate tab for any episodes that are currently in progress, and another tab for the downloaded ones.

The Google Podcasts app also recommends podcasts to the user based on subscriptions and listening habits with AI suggestions getting more personalised over time. The app also offers integration with Google Assistant. Notably, an audio player is always present at the bottom of the app and it comes with basic controls such as adjust playback speed, rewind/ forward, and information. Earlier this week, Zack Reneau-Wedeen, Product Manager, Google seemed to have accidentally released information prematurely around the Google Podcasts app. He'd mentioned the app will access to over 2 million podcasts across all 47 Play Store languages.

It is worth noting that for podcasters, Google has posted a developers page to detail guidelines and how to get a podcast listed in Search. Additionally, there is information about analytics, brand assets, and several other linking tools.

US Mobile Carriers Cut Off Flow of Location Data to Brokers
Nokia 5.1 Plus Specifications, Design Leaked on TENAA Certification Site