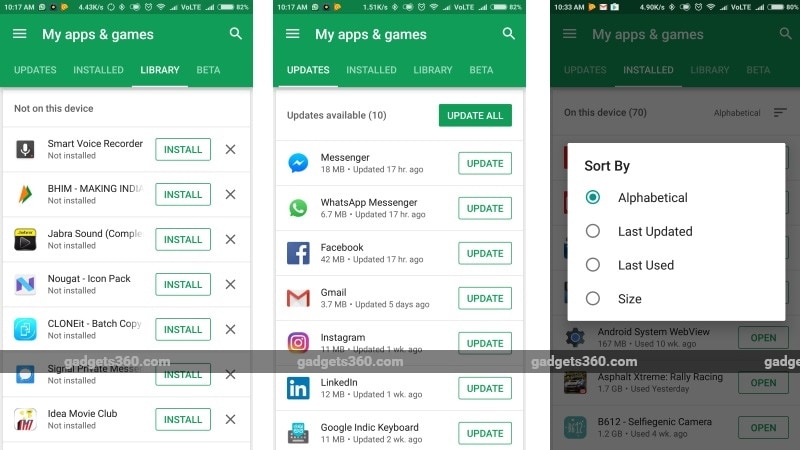 A revamped interface for the My Apps section of Google Play is now rolling out to Android users. The new interface, which was first spotted by Android Police, provides users with better organised categories and more utility than before. It potentially helps clear space on your Android device by allowing you to sort the apps you have installed.

The My Apps & Games section in Google Play, which allows users to manage apps that are associated with their Google account, has now received a makeover with latest update. Notably, with the update, users get the ability to organise the list of installed apps according to various factors including Alphabetical, Last Updated, Last Used, and Size. While arrangement according to alphabets and size makes sense, the most useful additions are the other two. Users will now be able to easily figure out the apps that have not been update for a while as well as the apps that have not been used for some time.

With this, users can easily free up the space on their devices by uninstalling the apps that they hardly use. The user interface has now been updated to add a dedicated tab for updates and removes the Subscriptions tab. You might notice that the size of icons in the list has now been decreased, to allow users to see more items than before in a single glance and thereby manage the apps easily.

With the update, the All tab has now been renamed to 'Library' and just like before, shows you the list of apps installed on the devices that have been synced with your Google account.

Google has started rolling out the update but notably, not all users can see it just yet. The version number of the Google Play app doesn't seem to be the differentiating factor either. However, the update is expected to show up for everyone over next few days. Android Police points out that clearing Google Play Store's app data might help some users get the update. We found that after clearing app data, restarting the device does help ensure visibility of the overhauled interface.

However, the Google Play revamp has also brought along one change that might not sit well with many users. Now, users cannot install apps from their library in batches and need to individually install apps that they need.

Google's mobile platform has often been accused of making things more complex while iOS is usually seen as a much organised platform but it seems like these sort of minor changes can ease up some of the issues that users face while handling their Android devices.