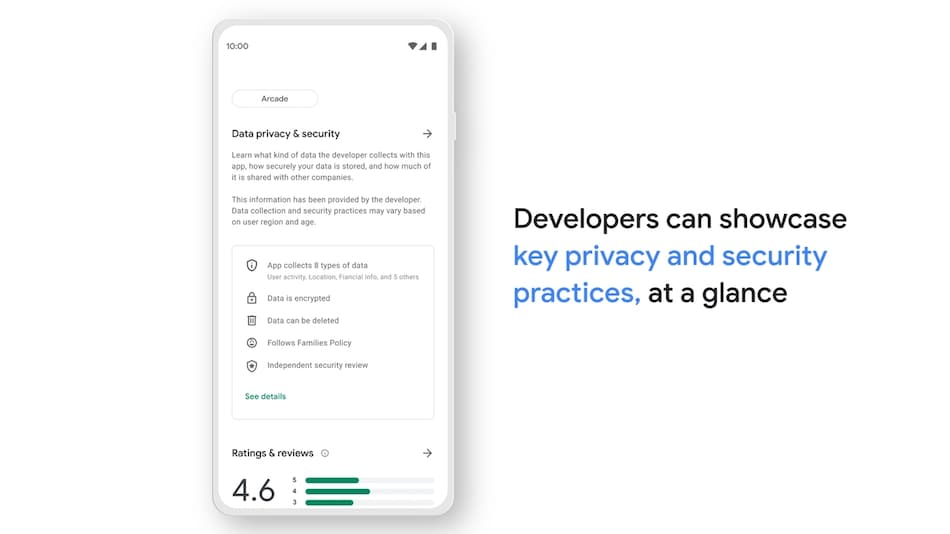 Google has shared more details about the upcoming safety section on its Google Play store. A new post from the company shows previews of what the Android app marketplace will look like once the new safety and privacy policies are implemented. Google, back in May, announced the new safety section for the Google Play store, where apps will have to mention how they collect user data and how it is handled — similar to Apple's App Store nutrition labels. Additionally, Google has announced that new user data policies changes that will be applicable on Google's in-house apps as well.

The post on the Android Developers blog from Google showcases how the Google Play store will look once its new safety section is implemented in the first quarter of 2022. "This new safety section will provide developers a simple way to showcase their app's overall safety. Developers will be able to give users deeper insight into their privacy and security practices, as well as explain the data the app may collect and why — all before users install the app," says the blogpost.

At a glance, users will be able to see a new summary in the app's listing page on the Google play store. The summary will have the developers' explanation of what data of the user an app will collect and how it will handle or use the collected data. The summary will also highlight certain points regarding users safety where it will mention the security practices the developer has used like data encryption. It will also mention whether the app follows Google's Families policies and whether the app has been independently validated against a global security standard.

Users will be able to tap on the summary to see details such as what type of data is collected and shared, such as location, contacts, personal information, financial information, and more. It will also detail how the data is being used by the app — for app functionality, personalisation, or others. The details will also contain information on whether the data collection is mandatory or optional for using the app.

Google also mentioned that it "learned developers appreciate when they can provide context about their data practices and more detail on whether their app automatically collects data versus if that collection is optional." Since the new safety section is still under development, the search giant says that the user interface (UI) can change when it is implemented. Google has also announced that all developers must provide a privacy policy for their apps to improve user transparency.

The search giant has also shared a timeline for its safety section that gives developers plenty of time to adapt to the new changes on the Google Play store. Developers can start submitting their information starting October and the new safety section will be visible to users from early 2022. Google has given developers a deadline till April 2022 for getting the safety sections of their apps approved, without which a new app or an update for an existing app may be rejected from being listed.

Google also has a 'how to get prepared' section for the developers on its blog. There is also a policy webinar for developers from India, Japan, Korea, and other regions.