Now developers, publishers, and users will be able to see a new rank change icon in its top app lists on Google Play. 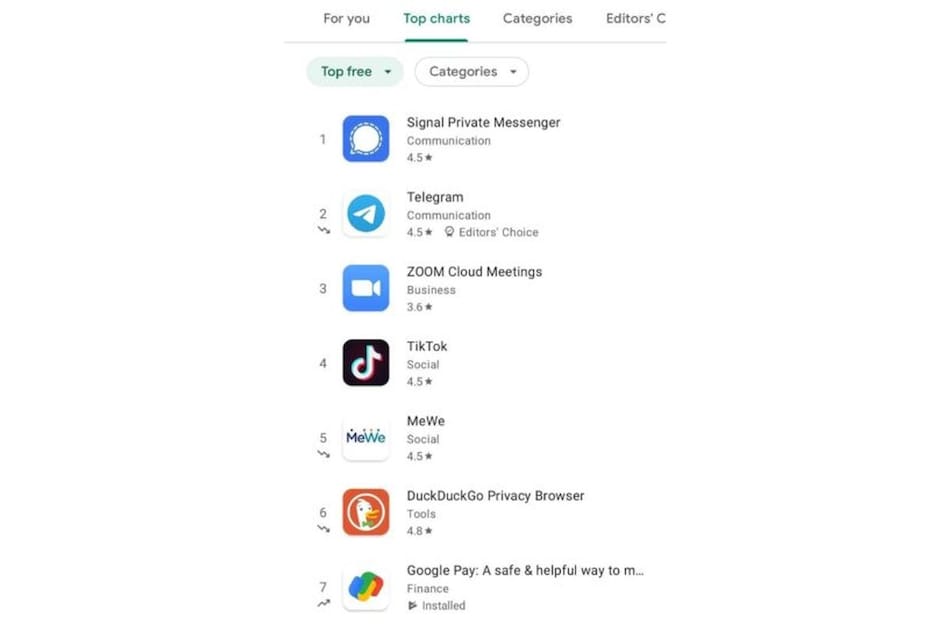 Google Play has introduced new icons that lets the people see which apps are trending and which ones are seeing a fall on the Play store charts. Now developers, publishers, and users will be able to see a new rank change icon in its top app lists on Google Play. The Android app store was reportedly experimenting with a new function to compare two or more apps by their features. A recent Sensor Tower report also showed that app spending during Christmas had grown by 35 percent globally.

The Top Charts tab below the search bar of Google Play store are showing the new icons.

Notably, the context time is lacking in the new ranking icons. This means that we don't know how frequently the download rates are tracked and how many slots has an app moved in that same time. There are just arrow marks showing if the app has gone up or down.

In October 2020, Google Play was reportedly experimenting with a new function to compare two or more apps by their features. The ‘Compare apps' section appears on an individual app's listing towards the bottom of the page and displays other similar popular apps.

With the change in lifestyle brought forth by the pandemic, people have been spending more money on apps. A Sensor Tower report that came out in December 2020 pointed out that worldwide spending on mobile apps reached $407.6 million (roughly Rs. 2,990 crores) across Google Play and Apple's App Store on Christmas day. This record spending showed a 34.5 percent year-over-year growth from $303 million (roughly Rs. 2,221 crores) in 2019.