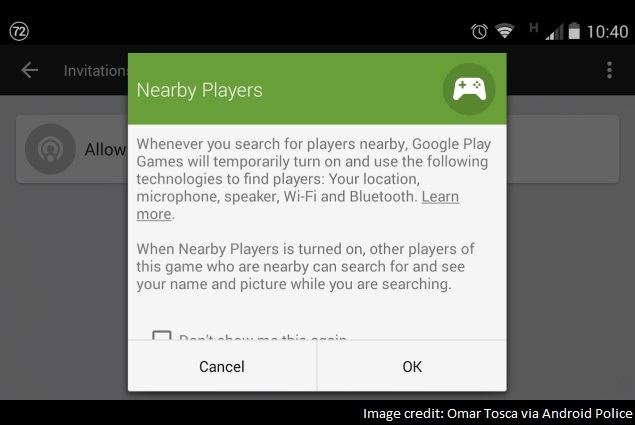 Google on Saturday reportedly started rolling out an update to Google Play Services, taking it to version 6.1.71, with some tweaks to previously spotted features discovered in an app teardown.

The update is said to include a new matchmaking feature with real time location sharing for gamers called Nearby Players, which uses location services and other sensors to determine which players are nearby. It is also accompanied by new searching animation that is different from the one previously discovered by Android Police.

The Android Police team have also discovered in their Google Play Services update (6.1.71) app teardown that that Google has also changed the name of the 'Personal unlocking' feature, which it had announced during the I/O 2014 keynote, to 'Smart Lock.'

In the meanwhile, users are reporting that they've already received the Nearby Players functionality on Google Play Games. The feature essentially alerts users when someone near their location is playing the same game from Google Play, and users can choose to filter this down to those who are on their Google+ contact list. Users can also search for multiplayer matches against nearby players.

The roll-out of the Nearby Players feature will be dependent on if the user receives the update to Google Play Services, however, Android Police speculates it may also require an update to Google Play Games. The roll-out of the Nearby Players feature doesn't seem to be limited to a particular region, with the website pointing out users in countries as far as Mexico and Italy reporting having received the update.
Comments