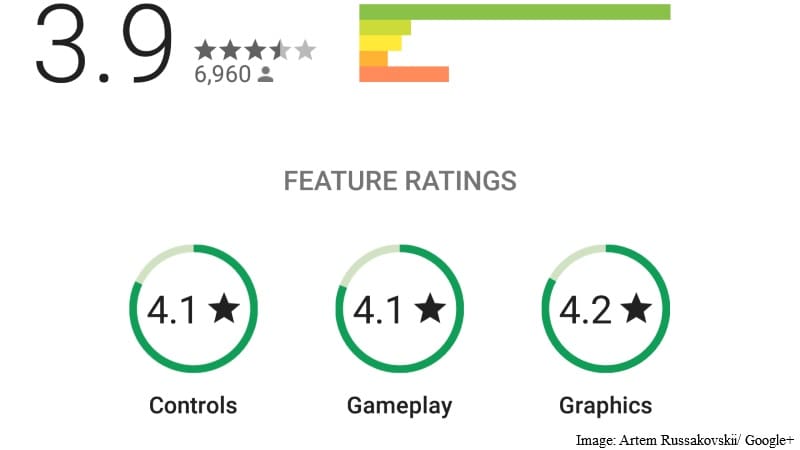 There is a huge range of games in the Google Play store right now ranging from genres like Adventure and Arcade to Action and Puzzles, plus a whole lot more. Typically, Google Play classifies the games into the aforementioned genres - in addition to free or paid - or just shows them according to the ratings and reviews they receive.

Reviewing and rating games is a tough job when certain aspects of a game are good but a few aspects failed to impress you. Until now, you could only give games an overall rating up to 5 stars, but that seems to be changing has new Feature Ratings circles have reportedly begun appearing in the Google Play store for game ratings for select users.

The new interface of the Google Play store shows new Feature Ratings circle that account for separate ratings of a game's Control, Gameplay, Graphics etc. As shared by a user on Google+ named Artem Russakovskii, this new feature is appearing below the regular rating bars and above the Review Highlights section. Adding to it, Android Police reports that the users who are able to see the Feature Ratings circle can also assign them while rating and reviewing a game.

Google Play store generally has a 2-step process to rate and review a game but for the users who have started seeing the Feature Rating circle, it has reportedly become a 3-step process. There are 3 additional steps to assign up to 5-star ratings to the game aspects like controls, gameplay, and graphics, separately.

Since this feature has only by a subset of the others, it's possible Google could be testing this feature only for a small percentage of users, and the feature may or may not see a wider rollout in the future.