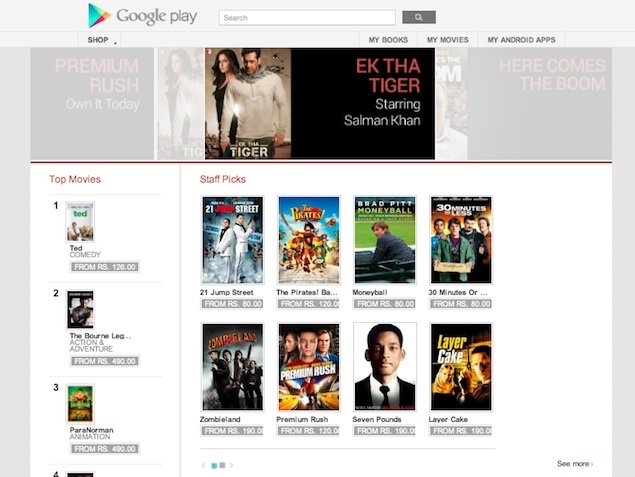 Google Play Movies are finally in India, about a month after Books were introduced in the Indian market. A Google Play support document mentioned the development.

Google Play Movies offers the ability to rent and purchase movies. Google has also rolled out the service in Mexico, in this round. Both Hindi and English films are available on the Store at the time of writing this post. Some HD titles are also available. One can rent movies for as low as Rs.50 and buy them for a minimum of Rs. 190.

The movies section has been made live on the web version of Google Play as well as on the mobile version. Users can install the Play Movies app on their Android device to download, watch and manage movies they've purchased or rented.

Movies can be streamed over Wifi or 3G via the Play store on the device or on a computer by visiting play.google.com/movies. Users can also download movies to their Android device for offline viewing via the Play Movies app. Purchased movies and TV shows can be downloaded on five devices at one time, while movie rentals can be downloaded to one device at a time, and when downloaded, streaming of the movie rental will be disabled on the user's computer and any other devices. If one removes the download of the movie rental on the device, it gets re-enabled for streaming or for downloading onto additional devices.

Pricing wise it's a little difficult to compare Google Play Movies with Apple's iTunes store as some titles were cheaper while others were priced higher.

It's interesting to note that Google started selling its Nexus 7 tablet in the Indian market through the Google Play Store just a day back. The company would certainly like to leverage its content ecosystem to get more from the sale of its devices, although it's not really subsidising devices in the Indian market.

Update: Google has also introduced rentals and purchases for films on YouTube in India. Users can rent a movie for 30 days but once they start playing a movie they need to view it within 48 hours. If they purchase a movie they can view it as many times as they like. Interestingly, Google has also enabled syncing of movie purchases between Google Play Movies and YouTube.