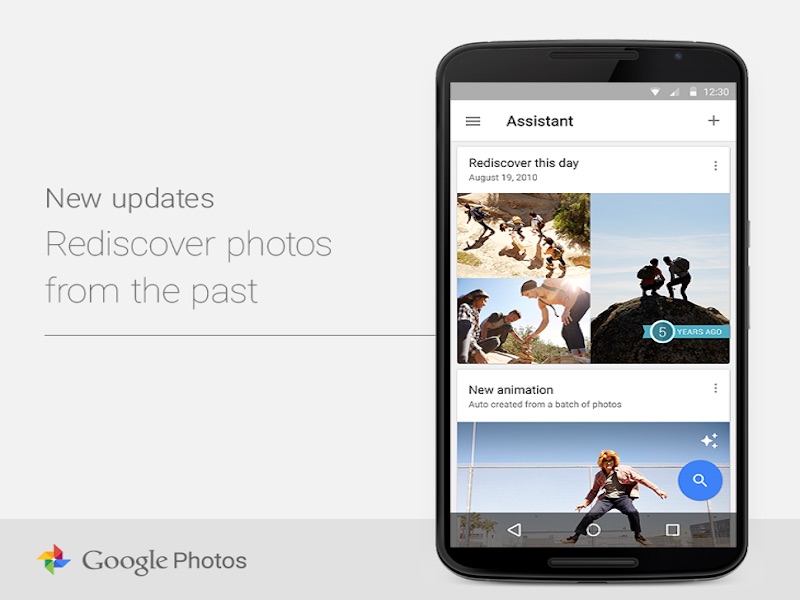 Google is becoming increasingly focused on its Photos app. The company recently separated the app from Google+, and introduced unlimited storage. Since then it has added several more features to make its service more competitive. The latest update to Photos' apps and Web interface adds an interesting feature that allows users to revisit photos and videos from the current calendar date in previous years. The company has also updated Google Docs and Sheets apps for Android.

Google Photos now lets users revisit the images and videos they shot on the same day in previous years, including a collage of the people and places photographed. The optional feature is accessible from the Assistant view under Rediscover this day. "Photos help us reminisce about the things we've done, bringing back events from one, two, or even ten years ago," said Google Photos team. "Today, Google Photos is introducing a new opt-in feature where you can choose to privately rediscover your memories from the past." The feature is live on the Web and iOS, and is gradually rolling out for Android. To note, the feature is only opt-in, and the photos and collages remain private to users until they decide to share them.

Moving on, Sheets for Android has also received an update. The company is taking major steps to make it easier for users to play with spreadsheet on mobile devices. The updated Sheets app offers auto-fill feature, wherein it can quickly add information based on patterns. Users will now see an auto-fill command in the pop-up bar when they select a range of cells to enter data. In addition, Sheets now automatically changes the keyboard mode in accordance with your work. For instance, if you're working on a cell, it will automatically show you numeric keyboard instead of the alphabetic keyboard.

Google Docs has also received an update on Android. The document editing app now lets users see print preview of their homework assignments and notes, helping them get an idea of how the documents will look after getting printed. You can see this from app's drop-down menu.