The redesigned Google Photo user interface could draw in more users to directly edit their pictures in the app. 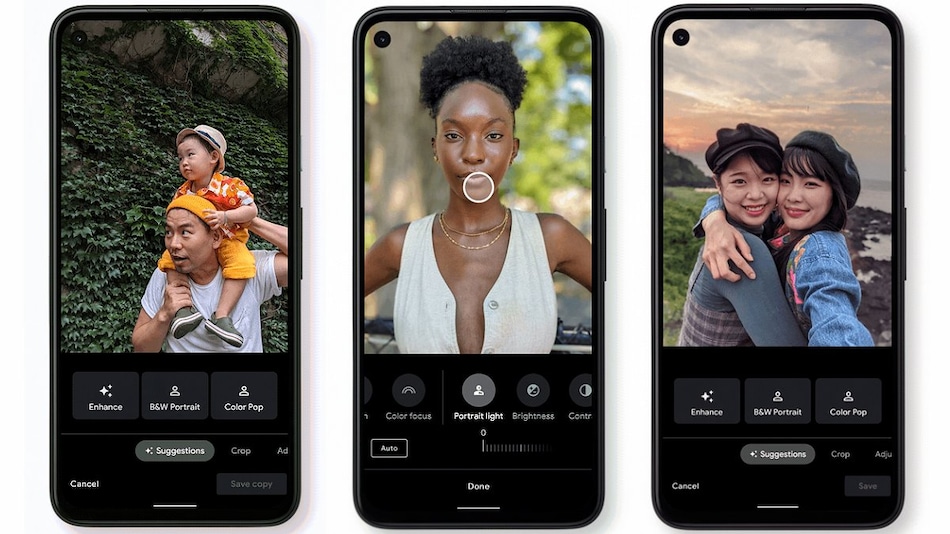 The Google Photos update will have automatic suggestions and granular controls

Google is rolling out a new editor for Google Photos on Android. The update will have machine learning-powered automatic one-tap suggestions, granular controls, and a cleaner interface. Besides that, Google will also let you see the specific edits it made, and tweak them to your liking. The redesigned user interface (UI) could draw in more users to directly edit their photos in Google Photos, without having to rely on third-party apps. The updated app has begun rolling out on all Android devices.

Google has added a new ‘Suggestions' tab in Google Photo's menu that will use machine learning to offer recommendations tailored to the specific photo you're editing. It will apply and adjust settings like brightness, contrast, and portrait effects. Currently, Google will be offering familiar suggestions such as Enhance and Colour Pop, but said that it would be soon be adding more suggestions to Pixel phones to help specific type of photos like landscapes, sunsets, and portraits stand out.

Google Photos will also have a new layout for its general editing tools. It'll be easier to scroll through and apply granular edits like brightness, contrast, saturation, warmth and more, while also discoverer new tools.

Google was spotted working on this new interface for Google Photos late August. Google Photos recently also got a revamp, with a three-tab design and a server-side switch in order to give users a ‘simpler experience.'

Google was also launching Portrait Light feature for Google Pixel 4a (5G) and Google Pixel 5, the tech giant's just-launched flagship smartphones. This editing feature uses machine learning to improve the lighting on faces in portraits. You'll also be able to adjust light position and brightness after clicking the photo, giving you more control over how your portraits look. Besides that, you can add Portrait Light to regular photos that weren't captured in Portrait Mode. This will be available for more Pixel devices soon.