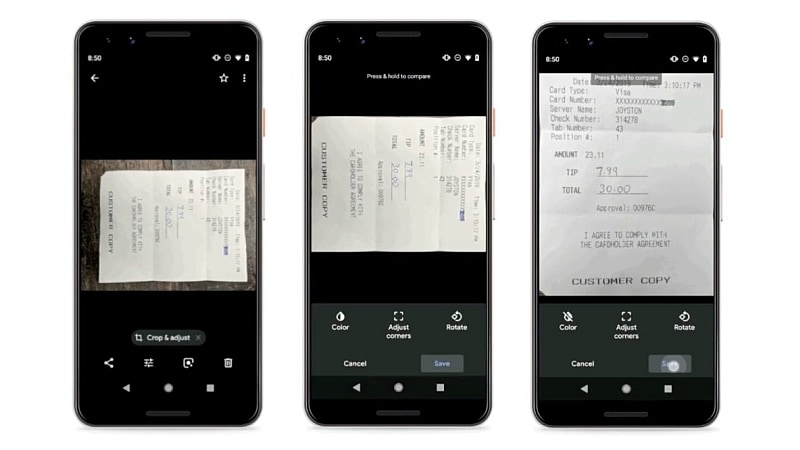 Google Photos for Android is getting a new 'Crop & adjust' feature specifically for scanning documents. The feature appears to be an extension of the Suggested Actions that Google announced at I/O developer conference last year. It not only gives suggestions to improve photos of receipts and other documents but also helps adjust colours and remove background using the integrated artificial intelligence (AI). Since the new feature is currently being rolled out to Google Photos for Android, it's yet to be available for the masses.

As announced through a Twitter post on Friday, the new Crop & adjust feature on Google Photos is rolling out to let you crop documents with a single tap. The app will show you a Crop & adjust pill at the bottom of the screen once it recognises the document captured. Tapping the pill brings three options, namely Colour, Adjust corners, and Rotate.

While the Colour option essentially adjusts the colours of the image to enhance its readability, the Adjust corner option allows you to remove the background and clean up the edges of your document. Both these options seem to use some AI inputs to enhance results. You can also press the Rotate option to manually rotate the frame.

Once edited, you can press and hold the image to compare the original and edited works. The standard Cancel and Save buttons are also available to help you either store or discard the edited image.

We weren't able to spot the Crop & adjust feature on the updated Google Photos app on our Android devices. However, since the Twitter post announcing the new feature mentions that the update is rolling out this week, we can safely expect its arrival soon.

You can visit Google Play to download the latest Google Photos version.