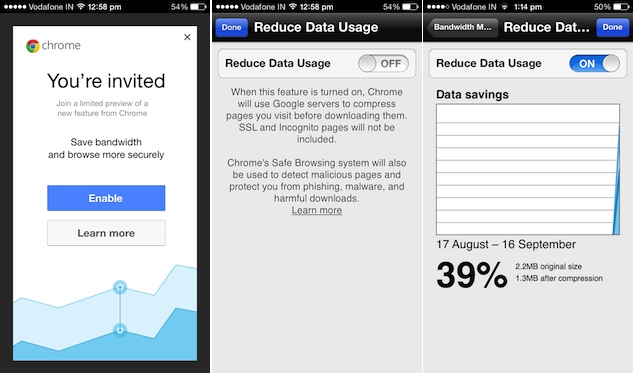 Google is rolling out the data compression feature on Chrome for iOS to select users. Since there's no Chrome Beta for iOS, Google's inviting limited users to try the feature, which allows users to save data bandwidth, as it renders pages through Google proxy servers. The feature was first enabled with the Chrome for iOS update in July, and strangely enough, the company is still treating it as a limited preview now, despite promising a rollout then.

Selected users get a "You're invited. Join a limited preview of a new feature from Chrome. Save bandwidth and browse more securely" message when they open the app. After tapping the 'Enable' button, the app offers a 'Reduce Data Usage' toggle. Google also displays the message that when the feature is turned on, Chrome uses Google servers to compress pages the user visits before downloading them. However, this does not include SSL and Incognito pages to address privacy concerns. It also mentions that Chrome's Safe Browsing system will also be used to detect malicious pages and protect users from phishing, malware, and harmful downloads.

Chrome's data compression option also appears under 'Bandwidth Management' in Settings, and displays a graph and percentage of the total data savings achieved. There's a second option through which users can choose to always preload pages via Google servers or only when they're on Wi-Fi.

The compression feature was first tested on the Android version by Google in March, though activating it then had required additional steps. Following this, it started offering the Bandwidth Management feature via the Settings on Chrome Beta for Android, starting April.

The code related to the feature also mentions Google's SPDY proxy servers. SPDY, a short form for Speedy, is Google's experimental protocol for transporting content over the web, designed specifically for minimal latency. It forces SSL encryption for all websites (even non-secure ones) to speed up browsing.