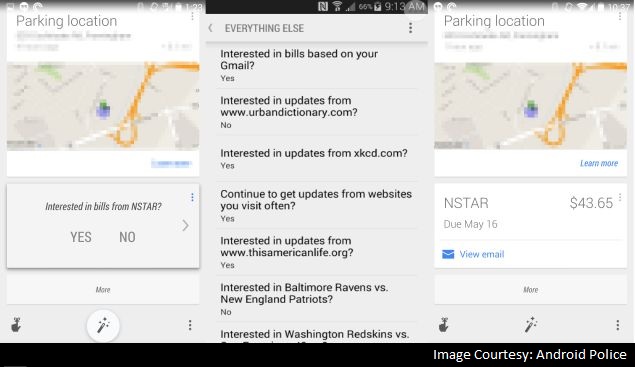 Google has started rolling out a new update for its popular Google Now service, which should be available gradually globally. The latest update deals will offer bill payment reminders to users if they receive bill payment emails on their Gmail accounts.

The search giant identifies emails with bills from the user's Gmail account, and current bills will show up as Google Now cards with the name of the biller, the amount, due date and the option to take a look at the mail in which the bill was sent, as per Android Community..

Although this update is not a major addition, it seems like Google working to differentiate its service as much as possible from Cortana and Siri, as we have seen a couple of similar small upgrades in this month. Google, including the billing card feature, has rolled out a total of three updates for its Google Now in May.

Earlier this month, the firm updated its Search app with a new location-based shopping feature that sets a reminder in form of a Google Now card. The updated Search app will remember items that a user has searched for in the past, and then using location data, inform the user via a Google Now card when a nearby retail store is stocking the same item. The reminder card shows the product and its price to user with a list of nearby stores where it can be purchased.

The firm also updated the Search app for Android, bringing the ability to access Google Now cards offline. The Search app now lets users view their Google Now cards even if there is no active Internet connection. In the absence of a data connection, the last state of the cards will be displayed, so while the information may not be up-to-the-minute, it's better than not having access to anything.